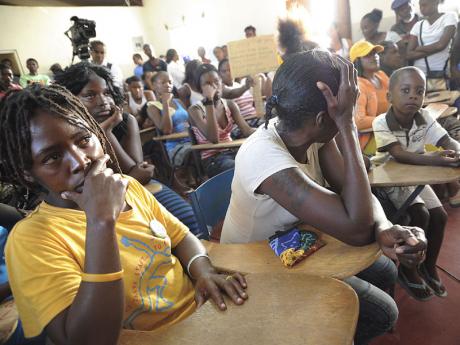 Residents of Jarrett Lane, off Mountain View Avenue in St Andrew, take part in a meeting put on by the police on Monday to address the klling of Kavorn Schue in the community on Saturday. -Ricardo Makyn/Staff Photographer

The Independent Jamaican Council for Human Rights (IJCHR) is calling for Commissioner of Police Owen Ellington to share with the country the findings of the administrative review in the Kavorn Schue killing.

Schue was killed by police at his home early Saturday morning on Jarrett Lane, off Mountain View Avenue, in what police say was a shoot-out. Residents dispute this, saying the young man was killed in cold blood. Schue was sports coordinator of the Mountain View Police Youth Club and has been described as a positive influence within the community.

In a statement issued by IJCHR chair Arlene Harrison-Henry, the council recalled when the commissioner expressed concerns about the number of fatal killings involving police. In March, Ellington had argued that "the number of reported incidents involving use of force by members of the Jamaica Constabulary Force (JCF) and the Island Special Constabulary Force is unnecessarily high and oftentimes unwarranted".

The council also noted that Ellington promised a review of the JCF's Use of Force policy. On April 2, Ellington announced that police personnel had consented to making changes to the policy. The changes listed included some new measures and a repeat of others announced in 2003 by then Commissioner of Police Francis Forbes.

Among the new measures was a requirement that divisional shift commanders, upon taking up duty, be reminded by police control they would be held accountable for the use of force by the persons under their command. Measures from Forbes' original directive that were maintained, included the need for increased use of non-lethal equipment such as batons and pepper sprays and a requirement that police officers must identify themselves and give clear warning that they intend to use their firearms before discharging them.

The council also wants Ellington to give an update on any action taken by him in relation to those police killings in March. The IJCHR urged him to not only insist on strict adherence to the Use of Force Policy but to rid the JCF of those who breach it.

"The country is weary of the wanton killings from whatever source our democracy is threatened. The leadership of the Force must take control and insist on the strict adherence to the use of force policy," the statement said.

Meanwhile, residents of Jarrett Lane plan to stage a candlelight march on Friday, in memory of Schue. The march will start at 6 p.m. at the Mountain View Police Station and will culminate at Schue's home. Residents are asking anyone wishing to participate in the walk, including members of the media, to wear white out of respect.