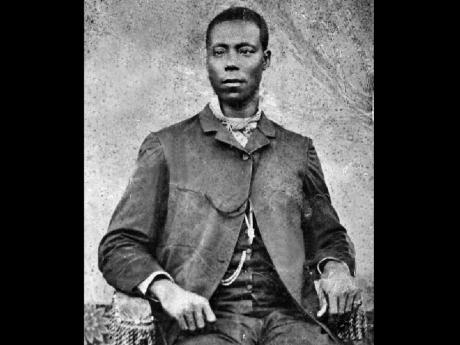 RECENTLY, PETER Knibb, chief financial officer of Pan Caribbean Financial Services, sent me a February 2012 issue of BET magazine in which the identical picture and pose most Jamaicans identify with National Hero Paul Bogle was ascribed to Thomas L. Jennings.He yearned to know what was happening.

In 1821, Jennings invented dry cleaning, which keeps threads tight.He was also the first African American to receive a patent in the United States.Unfortunately, he does not have a patent on his picture, hence Jamaicans could apparently allege that it belonged to Bogle.

Furthermore, there are many within cultural circles who are aware of this problem. In the file of Bogle at the National Library, there is this intriguing comment, "W.G. Ogilvie, a member of the Jamaica Historical Society, has discovered a photograph which, although it has not been absolutely authenticated, appears genuine".This picture was never authenticated, so when was the transition made for it to be the picture of Bogle even appearing on our money note? It was a genuine picture from the 19th century, but apparently not Bogle.

The editorial note at the National Library continued claiming that it was the photograph of Bogle because "the sitter's style of dress is what a local preacher would have worn in those days - a black three-piece suit, rather clerical, but lacking the round, white collar buttoned behind, since Bogle had not been ordained". However, Bogle was ordained, and his ordination certificate was signed by his business partner George William Gordon and fellow pastor Richard Warren (See The Cross and Machete, pp 72-77).

This picture was discovered in 1971, six years after Edna Manley completed the sculpture of Bogle, which features some people did not like. According to Edna Manley: The Diaries, her sculpture was based on the pose of a descendant of Bogle, which would give her a more accurate resemblance of Bogle.

In addition, the Colonial Standard of October 18, 1865 gives an insight into the physical features of Bogle as "a very black man, with shining skin, bearing heavy marks of smallpox on his face, and more especially on his nose; teeth good, large mouth with red, thick lips; about five feet eight inches in height, broad across the shoulders, carries himself indolently, and has no whiskers". This description, with its demeaning use of smallpox, would possible be indicative of Bogle in many ways since this description was given in order that Bogle could be captured for the reward of £2,000.

As we celebrate Jamaica 50, let us not embarrass the memory of Bogle by waiting on the United States or the family of Jennings to charge us with plagiarism. Let us use Edna Manley's depiction of Bogle as a better picture of Bogle.

In addition, we also have the wrong picture of Bogle concerning his characteristics. He is still seen by too many persons as someone who had violent intentions.Manley, in her statue, captured the essence of Bogle as a Christian martyr in the mould of Jesus the Christ, whom he served with his outstretched arms reminding us of the crucifixion of Jesus.Indeed, Bogle was inspired by his Christian Faith to agitate against the injustices in the society, low wages and lack of land.

We who have the right image of Bogle should be concerned that the former Jamaica Labour Party administration had promised a liveable wage criteria, but nothing has been released. And the People's National Party had promised that those who can afford to pay for education and health should pay, but there has been no implementation of this wise policy which could help the less fortunate.

Devon Dick is pastor of the Boulevard Baptist Church in St Andrew. Send comments to columns@gleanerjm.com.