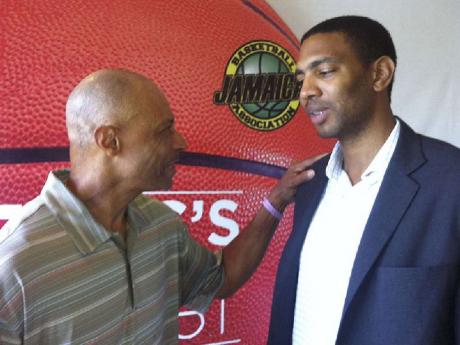 James 'Jim' Cleamons (left), the new head coach of Jamaica's women's basketball team, makes a point to Ajani Williams, president of the Jamaica Basketball Association, during a function to announce his appointment at the Grand Palladium Resort and Spa in Hanover yesterday. - PHOTO BY Adrian Frater

JAMAICA'S women's basketball programme got a major boost yesterday when former top-flight NBA coach, James 'Jim' Cleamons, was unveiled as the new head coach ahead for the country's team to participate in the upcoming Centro Basketball Championships in Morovis, Puerto Rico, from June 12-16.

In an official ceremony to introduce the coach at the Grand Palladium Resort and Spa in Hanover yesterday, Ajani Williams, president of the Jamaica Basketball Association, said he was overjoyed to have Cleamons spearheading the women's programme.

"He (Cleamons) is one of the most distinguished coaches in the history of the NBA and it is a real pleasure to have him here with us at this time," said Williams, noting that getting the famed US coach on board was the culmination of two years' effort.

For his part, Cleamons said he was delighted to be working with the national women's team, stating that success will require a lot of hard work, while expressing a hope that his Jamaican sojourn will be a labour of love.

"Success will not come overnight, but it will happen over time," said Cleamons, who is credited with helping to perfect the 'triple offence', which was instrumental in the Los Angeles Lakers winning the NBA championship in 2000, 2001, 2002, 2009 and 2010.

"We have to work hard ... sometimes we will get knocked down, but we have to get up and continue working ... . That is the key to success."

Simone Edwards, who has been serving the national programme as player/coach for quite a while, was also unveiled as the associate head coach, which means she will serve as Cleamons' deputy.

"It is a great pleasure to be working with a coach like Mr Cleamons because we have shared a similar philosophy ... . We see ourselves as teachers," said Edwards. "It is also good to have someone of this stature to work with because there is so much to learn from him."

While Cleamons spoke with a long-term perspective, Williams said his current contract is for one tournament. In fact, for the upcoming Centro Basketball Championships, he will be in charge for the first game and then make way for Edwards, who will take charge for the remainder of the championship.