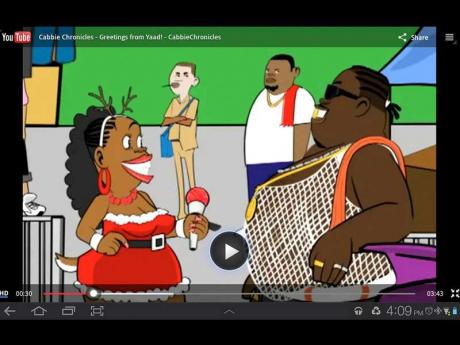 The show, which gained popularity after being introduced to Jamaican audiences on Flow TV, has now gone mainstream.

According to Alison Latchman, the CEO/writer at Alcyone Animation, the series developed after they won an award in 2010.

"In November 2010, we entered the Animae Caribe Animation festival and we won the Best Caribbean Animation Award. After that, we developed the rest of the season, which is now being showcased on TVJ," Latchman told The Sunday Gleaner.

When asked about the move from Flow TV to TVJ, Latchman pointed out that this was done to improve the visibility of the show.

In addition to being shown on TVJ, Cabbie Chronicles also has its own website www.cabbiechronicles.com. The website offers insight into the characters, a glossary of terms used in the show and episodes which are available at a cost.

Latchman also told The Sunday Gleaner that the feedback from the show has been tremendous.

"The feedback has been great! Comments on our Facebook page and YouTube channel suggest the viewers love it! Their only complaint is that it is too short and I agree. Just to let the public know that to produce just one episode [season] of Family Guy or The Simpsons, it takes six to nine months with a team of 45 to 60 people. We're doing the same thing with 5," she said.

With the overwhelming feedback from the show, producers are striving to extend the five-minute time slot as of December. Plans are also under way for an Independence episode which will be aired this year.

"We will be rolling out merchandise soon. Persons can log on to www.facebook.com/cabbiechronicles to keep up to date with all the happenings. As long as people want it, we will keep producing shows that reflect true Jamaican life," Latchman said.