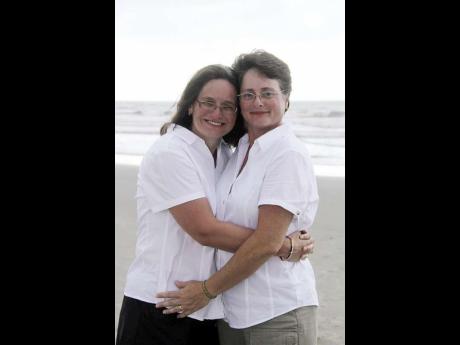 This July 2010 photo shows lesbian partners Catherine Crisp (left) and Keye McKinzie, the latter a former career army officer who is ecstatic at the repeal of the 'don't ask, don't tell' policy. - AP

Buoyed by the recent lesbian nuptial re-enactment in Silver Sands, Trelawny, one member of a local same-sex couple has declared that she wants to get married in Jamaica.

Montego Bay-based lesbian model Adrienne Simpsontold The Sunday Gleaner she would love to have even a token marriage to her partner.

Simpson, whose modelling career has taken her into countries that embrace same-sex unions, says she is eyeing this token marriage and will not allow the Jamaican law to be a "shackle" to her plans.

"I am in a relationship with someone who is giving me love, kindness and all the support I need," said Simpson.

"I have been with men and none of them has shown me the love and respect I am now getting," added Simpson.

Despite her pronouncement, Simpson admits that sometimes her conscience bothers her.

"I know it is not accepted in Jamaica but this is someone I want to spend the rest of my life with," said Simpson.

"Sometimes my Christian upbringing chips in and my thoughts waver, but deep down this is the life I want."

According to Simpson, same-sex 'token weddings' are becoming quite common in Jamaica without attracting much fanfare and publicity.

"This is something that is happening regularly in Jamaica these days. I know several persons who have done it and are living happily. In many instances, these lovers operate similarly to the traditional husband and wife … one goes out to work and the other stays home and does domestic duties," added Simpson.

In the case of the Silver Sands mock nuptials, the 'bride' and 'bride', Jamaica-born Nicole Dennis-Benn and her American partner Dr Emma Benn, reportedly got married in New York, where such unions are legal, and merely came to Jamaica, where there is general intolerance to gays, to re-enact what had taken place overseas.

But many persons, including prominent church leaders, have condemned the recent mock nuptials at Silver Sands as an assault on the Christian way of life and saying they are not prepared to allow gay marriages locally.

"This is something that is not pleasing to the Church as it goes against our teaching, which sees marriage as a union between a man and a woman," said Canon Justin Nembhard, the head of the St James Parish Church in Montego Bay.

"It is illegal … in Jamaica. Marriage is not a union between any two people; it must be between a man and a woman," said Nembhard. "This kind of thing is not the norm and is not something you would expect to see in a Christian country."

Not allowed in Jamaica

Like Nembhard, prominent Montego Bay-based lawyer Nathan Robb has noted that regardless of how close the event at Silver Sands mirrors real nuptials, based on the Jamaican law, no marriage officer could legally perform such a wedding.

Robb also dismissed the notion that a marriage officer from a jurisdiction where same-sex marriage is allowed could come to Jamaica and perform such a ceremony legally.

Legal minds have also noted that Simpson and her partner could never get legally married in Jamaica as Section 18(2) of the new Charter of Rights of the Jamaican Constitution defines marriage as a "union of one man and one woman".