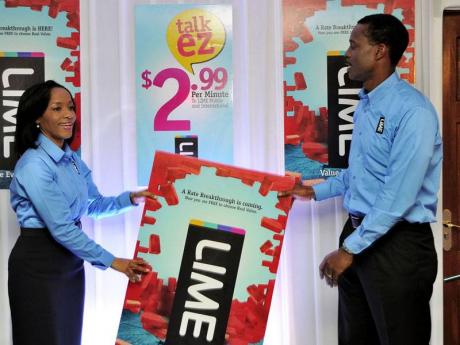 
Further rate cuts could follow yesterday's announcement by LIME to slash its rates by up to two-thirds.

Regulatory rate drops and a massive write-off of mobile assets allowed it to offer those rates, management stated.

"This plan is sustainable," reasoned Rochelle Cameron, head of legal and regulatory affairs at LIME, at the head office in Kingston yesterday.

Digicel, the mobile market leader, gave no indication last night whether it would also be moving to drop its call rates. In a media release, Mark Linehan, Digicel CEO, noted his company's previous rate drops.

"Digicel also led the way again by lowering retail rates twice so far this year and introducing innovative pricing such as our one-rate option," said Linehan.

In the meantime, the drop in LIME's call rates coincides with the Office of Utilities Regulation (OUR) setting interim wholesale and retail telecommunications rates at $5 from $9 effective July 15 and follows an earlier amendment to the Telecommunications Act.

Phillip Paulwell, the minister with responsibility for telecommunications, last night told The Gleaner that the decision by Parliament to amend the Telecommunications Act has now redounded to the benefit of consumers.

"Competition is going to be fierce now and the market is going to me more robust and attractive for others to enter," Paulwell said.

The minister also told The Gleaner that while he is glad to see call rates coming down, "there is still room for the lowering of price on the data side".

The slash in rates represents the most aggressive move by LIME to win back market share from Digicel, the nation's largest mobile network. LIME's rates are so reduced that its highest rates at $6.99 cross-network are now below some of the lowest rates on Digicel's network.

"This is an aggressive move and we promised it. This is what people were waiting for," she said.

The lower rates provide the loss-making telecoms with a strong marketing platform to earn a profit for shareholders.

"We will not reveal our targets but let's say that this will pull in legions of new subscribers," said Garry Sinclair, managing director of LIME.

LIME has 300,000 active customers compared to some two million on the Digicel network, according to previously stated statistics from both providers.

The new rate will cut the net amount earned on each cross-network call for LIME from $3 to $2 but, interestingly, raise its gross margin in the process.

"Everything we do is to enhance shareholder value ... and this offer will improve shareholder value and carve back market share," he said acknowledging that LIME's massive write-down of mobile assets allowed it to offer these rates.

LIME Jamaica lost J$20 billion at year end March 2012, the majority of which related to a near J$16-billion write-down of fixed assets.

Revenue was virtually unchanged, year to year, from J$20.8 billion to J$20.4 billion. It was the fifth straight year of losses for the company which spent billions to upgrade its mobile and broadband infrastructure to compete against rivals Digicel and Flow.

LIME's capital expenditures have been averaging J$5-6 billion per year, but in the year just ended, it was down to J$3.7 billion.