Portia must seek to energise public 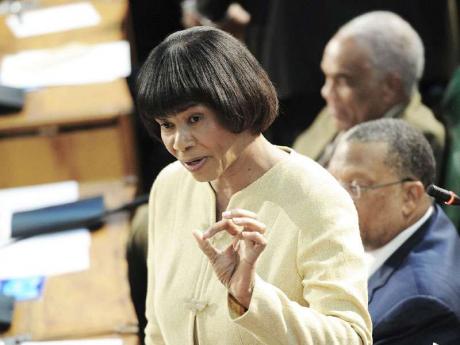 Robbie Earle, the first man to score a goal for Jamaica at the World Cup finals, chronicled how then Minister of Sports Portia Simpson Miller contributed to the Reggae Boyz World Cup experience in France 1998. Earle reported that the night before their first game against Croatia, the entire squad watched in horror a TV documentary by Britain's Channel 4 which painted a very unfair picture of the Boyz's camp in Jamaica.

Upset and disgusted at the documentary, the players were not in a good place emotionally before the greatest game of their lives. On the day of the game, then Prime Minister P.J. Patterson and Sports Minister Simpson Miller visited the camp to wish the boys well and then left.

The sports minister, gifted with superior emotional intelligence, realised something was terribly wrong and returned on her own shortly thereafter. On hearing of the players' plight, Simpson Miller proceeded to deliver the greatest motivational speech Robbie Earle had experienced in his entire life.

The rest is history. Jamaica went toe to toe with Croatia, the competition's eventual semi-finalists, but eventually lost 3-1, with Robbie Earle heading home just before half-time on a pass from Ricardo Gardner.

Many persons still believe the Croatia game was the greatest ever played by Jamaica. In fact, Jamaica's defence (marshalled, on the day, by Onandi Lowe) kept the eventual Golden Boot winner Davor Suker off the scoresheet until very late in the game.

Mrs Simpson Miller's impact was a living testament to what the guest speaker, Georgia Governor Nathan Deal, said at this year's Georgia Tech graduation: No effort is higher than trying to lift the human spirit.

It is against this background that I believe our prime minister ought to have been flown first-class to attend Jamaica's World Cup qualifier in Antigua last week Tuesday at taxpayers' expense. Her late arrival at the Sir Vivian Richards Stadium apparently left little time to motivate our players in what turned out to be a lacklustre performance on their part.

In her contribution to the Budget Debate, Prime Minister Simpson Miller delivered well for the most part, although she could not resist the usual practice of prime ministers delivering goodies from the National Housing Trust (NHT) bag. I was disappointed that the prime minister failed to outline an explicit and credible growth strategy; as I am not convinced that energy cost reduction, a couple of mega projects, a creative industry policy and JEEP constitute such a growth strategy.

What I will say, however, is that the prime minister did go a far way in outlining critical components of the social policy, including the NHT goodies, empowering persons with disabilities, the Community Renewal Programme and the increased roles of the Urban Development Corporation, Jamaica Social Investment Fund and the PetroCaribe Fund. Of interest was the $1-billion allocation to relocate eight sugar barracks on lands excluded from privatisation and the planned reorganisation of Kingston as a heritage site.

The most important part of the prime minister's presentation, however, centred on core values and attitudes.

Mrs Simpson Miller passionately stated that we need to rekindle compassion, trust and love. She reminded us that the social capital of love allows us to work together and become prosperous, indicating that love may just be the growth strategy.

The prime minister continued that we need to embrace the core values of honesty, respect and accountability; and has vowed that her administration will be defined by respect, trust and transparency. Mrs Simpson Miller wants trust to embrace Jamaica as we chart the next 50 years, and what is required is an attitudinal shift in how we treat with the vulnerable, children and those with disabilities.

While the prime minister lamented the fact that more than 2,000 children went missing last year and thousands more were abused, she made it very clear that parents need to accept their responsibility. Mrs Simpson Miller was at her brilliant best when she said that Jamaica is not a name - it is the pride of a people.

ROLE OF CORE VALUES IN BUSINESS

In any strategic planning process today, core values play an integral part in guiding an organisation towards its vision and mission. In fact, long before strategic planning was in vogue, organisations operated strictly on adherence to core values. Sam Walton, founder of Wal-Mart, made it very clear that the customer was No. 1, and mandated that all benefits gained from purchasing goods at lower-than-budgeted cost must be passed on to customers. Many Wal-Mart store managers who failed to adhere to this simple core value were given the boot.

Anyone who grew up in a family business will tell you that the business ran not on a set of written rules or strategies, but simply on the core values instilled by their parents. How then can we utilise core values to make a better society?

While Mrs Simpson Miller has the social capital to influence the attitudinal change among the majority of the population, we cannot really hold her accountable as such. In reality, the prime minister is not the leader of Jamaica; rather, she is the leader of the Government and must be held accountable for the extent to which public servants make the necessary attitudinal changes.

The word 'minister' is derived from the Latin 'ministrare', which means 'to act as servant; to attend'. The prime minister, government ministers, ministers of state, permanent secretaries and all public-sector employees are collectively public servants, expected to serve or to attend to the needs of Jamaican citizens. Therefore, whatever growth, debt and social strategies we design must be executed by public servants.

I am convinced that the collective underperformance by our public servants is the main reason for our anaemic growth, mounting debt and insufficient social protection. In developing strategic plans for our government ministries, departments and agencies, a paradigm shift from civil service to customer service is required.

Public servants must, therefore, heed the prime minister's call for honesty, respect, accountability and transparency. No longer should public servants resist being measured and being held accountable for performance. While our teachers come immediately to mind, it is important that ministers and permanent secretaries are also held accountable for performance. No longer should access to information be like an obstacle course, nor should results of public tenders and waivers granted be kept secret.

NEED TO LEARN FROM PATTERSON'S MISTAKES

Prime Minister Simpson Miller is on to something with her call to live core values and make attitudinal changes. She must, however, have a quiet word with former Prime Minister Patterson, whose Values and Attitudes campaign over a decade ago got very little traction.

Tom Crane has defined three main functions of a leader: chart the course (articulate a vision and get buy-in); model core behaviour (values); and coach to high performance. Mr Patterson's challenge was that while he modelled the desired behaviour, he failed to discipline those in his administration who deviated from such behaviour. Hence, very few persons took him seriously.