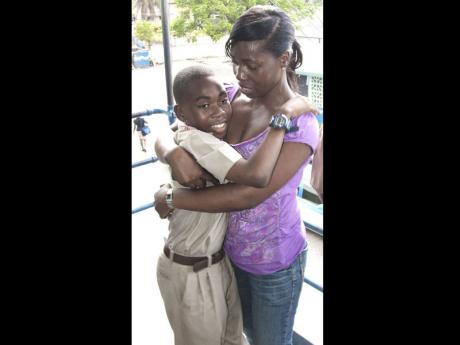 Zavoy Hayles gets a hug from mom Viviene Stewart after he got the news that he was placed at Jamaica College.-PHOTO By CARL GILCHRIST

OCHO RIOS, St Ann:WITH A score of 100 in mathematics, 98 in social studies, 97 in science, 94 in language arts and 10 out of 12 in communication tasks, Ocho Rios Primary School student Zavoy Hayles has got his wish to attend Jamaica College (JC) in September.

"I feel very excited, I'm very happy," Zavoy told The Gleaner shortly after receiving the news at his school on Wednesday.

And even though he knew he had performed well, Zavoy admitted that he was expecting to go to his second choice, York Castle, because of the rush for space at JC. He expressed confidence in his ability to continue performing well at the secondary level.

"I expect to perform at the same level I'm doing now," he said in his usual quiet manner.

Mom, Viviene Stewart, who could not hide her nervousness leading up to the release of the results, was a relieved woman when she heard the news.

When the results were announced, she couldn't contain her joy, jumping and screaming with a friend, Melrose McLean, who had accompanied her.

"Right now, I'm on top of the world. It's like the world is mine today. I'm on cloud nine, seriously. I'm so happy," she said.

Grade-six teacher Vivienne Wilmot, who had guided Zavoy since September, was not surprised that he was placed at JC.

"I was expecting Zavoy to get his first choice," said Wilmot.

It is a fitting climax to months of hard work by the youngster who had continually expressed confidence in his ability to do well.

In the first Gleaner interview, Zavoy had revealed that he had a photographic memory and rarely studied. He, how-ever, formulated a study schedule later on, which he followed after that.