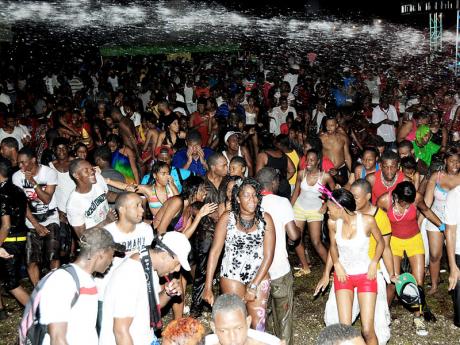 Staple events such as Stages, Wildsides, Naked and the second-timer Officially Diagnosed will make welcome the newcomers The Official and Original Water Party and Mariposa-Full Moon Party to the weekend.

Absolute Entertainment's Alex Chin shared that although new, the two events are ones that he is confident will hold their own as a part of the party weekend.

"Water Party gets five to seven thousand people in town as it is. That one you can really rest your hand on to succeed and that's just in Kingston. When we go to Negril, as I tell any promoter, if you get 2,000 people in Kingston - which is the average for a good Kingston event - when you go to Negril expect it to double. So I'm afraid of what Water Party going to do when them go Negril because them already eclipse town numbers. Now, the entire island is looking to come to the Water Party," he said.

He continued to talk of Mariposa, saying, "In terms of Mariposa, it's a nice new party over the last three years coming up. Some of the promoters are a part of Big Cups (another event), I love their energy, they're a nice set of young guys that will bring new blood and energy into the weekend that is going to make us even better in years to come."

Members from the promotional team of both events, Andrew Bellamy (Water Party) and Omar Shoucair (Mariposa) told The Sunday Gleaner they were currently gearing up to deliver to patrons in Negril.

Bellamy told The Sunday Gleaner: "The Official and Original Water Party has proven itself in Kingston over and over. We're the largest, most consistent water-theme event/party in Kingston and St Andrew, so clearly the energy, the vibes that we have here is actually a replication of what takes place in Negril. So we're adding that to the ATI formula this year and Negril will see its first version of the biggest, the best, true water-party experience."