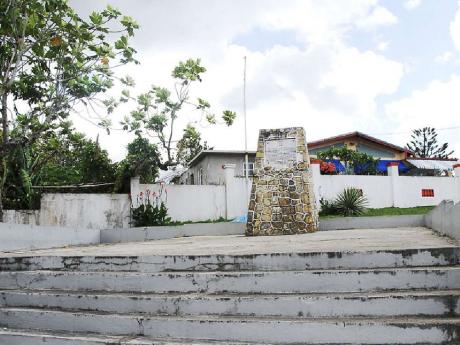 The monument erected in honour of Maroon hero, Captain Cudjoe.

Accompong is a historical Maroon village located in the hills of St Elizabeth in Jamaica. It was formed after the Maroons signed a peace treaty with the British in 1739.

It is listed as one of the two areas where runaway slaves settled. It was isolated enough to be safe first from the Spanish, and then later, from the British.

It is said that rebel slaves and their descendants wrested land from the colonial plantation and transformed a marginal mountainous reservation, imposed by a subsequent colonial legal treaty, into a sacred landscape rooted in common land.

The treaty granted the Maroons their long-sought-after autonomy.

However, when the Second Maroon War broke out in 1795, the Accompong Maroons remained neutral and the British left them alone.

At the end of the war, all the other Maroon settlements in Jamaica were destroyed; Accom-pong alone remained.

The town of Accompong was named after the Maroon leader Accompong, who was from an Ashanti family and was the brother of a number of other Maroon leaders - Quao, Cuffy, Cudjoe, and Nanny.

Cudjoe is credited for uniting the Maroons in their fight for autonomy. Descendants and friends of the Maroons come together in celebration of the treaty on January 6 each year, which is also Cudjoe's birthday.

The Accompong Maroons share practices and a culture similar to that of their African ancestors.