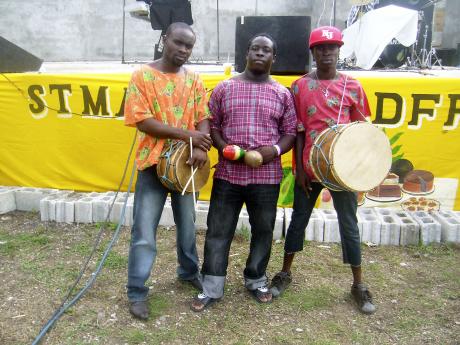 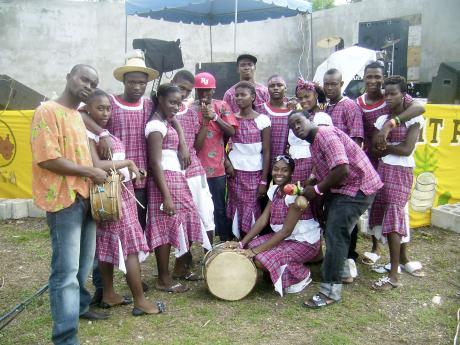 The Islington Culture Group from St Mary relaxes between performances at the St Mary Breadfruit Festival on Sunday, July 15. -photos by Paul Williams
1
2

JEFFREY TOWN, St Mary: THEY ARE young, energetic and talented, and they created a stir at the St Mary Breadfruit Festival held on Sunday, July 15. And they were not making boiled breadfruit punch. They were tossing the Dinki Mini into the mix.

In what was easily the high point of the day-time segment of the festival of breadfruits, the members of the Islington Culture Group from St Mary used their bodies and voices to say loud and clear that the Dinki Mini is alive and kicking - pun intended.

The Dinki Mini has its roots in the Congo region of Africa, and it comes from the Congolese word, 'ndingi', which is a song of lamentation played at funerals or during the periods leading up to them. Though associated with death, Dinki Mini rituals were celebratory occasions of merriment and joy. The original purpose was to cheer up the family and relatives of the deceased.

Bent knees and heel-and-toe foot movements are other important element of the Dinki Mini dance. The drums and other instruments are played in peculiar ways, and the music is characteristically lively and hypnotic, and can hurl performers and onlookers into a frenzy. And on Sunday, while the artistry of the young dancers was to be commended, the passion of the lead singers and musicians exploded at Ben's World, where the breadfruit festival was held.

Nowadays, Dinki Mini rituals are practised mainly in St Mary, St Ann, and Portland, a region in which enslaved Congolese were concentrated. Groups such as the Islington Culture Group are making sure that the Dinki Mini is kept alive, not only at funerals, but also at festive and cultural events.

All under the age of 30, and graduates of Islington High School, where they had been involved in this cultural form, the members seem to be really interested in preserving the Dinki Mini. "Culture is nice and it's good for every young person, it don't matter where they are from. Get involved, know your culture, and keep it alive," Ricardo Forsythe, the leader of the group, declared, "We are the younger ones, but we have to teach the smaller ones who will replace us."

And although there is the allure of dancehall popular culture, which some people say is pulling younger Jamaicans away from our indigenous cultural forms, interest in the Dinki Mini is still very strong among young people in St Mary. Forsythe believes the group is an inspiration to other young people in their communities, and said he would never turn away anyone who showed an interest in his group, which used to perform for tourists at Tacky's Falls in St Mary. They will be performing at the grand gala on Independence Day.

Elisha Powell, the lead drummer and one of the singers, said he has been involved with Dinki Mini from he was very young and has never thought of quitting despite the ups and downs of being involved with a performing group of young people who sometimes have a mind of their own. "The big woman, and the big man thing" is something he can't deal with.

The non-existence of a huge generation gap is not a significant challenege for the group, however. The most pressing matter is to get some support from the Government and corporate Jamaica to offset some of the expenses incurred by the group, which has many unemployed members.

"Trust me, it's pretty hard," Forsythe said. "I would really love one of those companies to take us up." Because he, too, has no intention of dropping the Dinkii Mini. "If I never love it, I wouldn't do it. Anything you see I do is because I love it. Jamaican culture is the greatest on Earth. We should never move away from the cultural aspect of Jamaica. Anybody who moves away from it is missing something. The culture is nice."

Drenched in sweat on Sunday, the young Dinki Mini ritualiists sang, played, and danced to the delight of patrons. Young, vibrant people, evincing the spirit of their ancestors, embracing and cherishing a legacy bequeathed them by their forebears, and when they were finished baring their soul, Ricardo Forsythe said, "I could feel the energy, the vibes, something chip in, a can't say is what, it keep me going. If the drum no stop, a won't stop."