Buggery and AIDS: a lot of bull 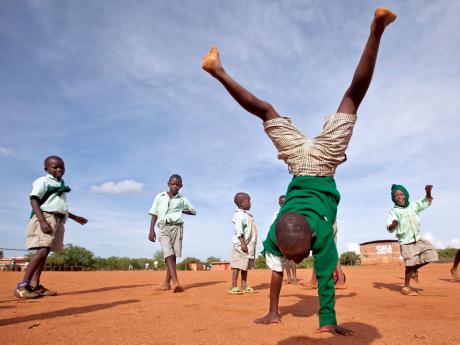 In main photo: Taken Wednesday, November 21, a schoolboy does handstands as he plays with others at the Hot Courses Primary School in Nyumbani, Kenya, which caters to children who lost their parents to HIV, and grandparents who lost their children to HIV. -AP

Yesterday was World AIDS Day. In school, we were taught that you can't have your cake and eat it too. Those who are pushing for the decriminalising of male-to-male homosexuality should focus on that agenda and not try to mix it inordinately with the issues relating to HIV/AIDS, unless they are arguing that the two are coterminous. Such an association, if ingrained in the media, will not help the struggle against stigma and discrimination.

Activists, including, apparently, Health Minister Fenton Ferguson, want to see the buggery law repealed. Indeed, Prime Minister Portia Simpson Miller definitively said she felt that it should be revisited. One should note, however, that the anti-buggery statute has not been applied in cases of private consensual male-male sexual activity in almost four decades, before most of the population was born. Like the laws which outlaw Sunday openings of supermarkets and women working more than 10-hour shifts, it is not enforced.

Nevertheless, the campaigners have to decide whether they are saying that consistent with the original lore, HIV/AIDS is the scourge of gay men, or it is simply not a gay disease. It is plain logic, and the persons pushing the anti-buggery law stance need to have in their camp more people who are less concerned with overworking their grey matter. By now, the standard knowledge in Jamaica is that HIV is not peculiar to Batman and Robin, but is seen more often among agent 'Ho-ho' seven and Daredevil. Most Jamaicans surveyed in studies conducted by universities, as well as governmental and non-governmental organisations, know that HIV affects all categories and does not reside solely in the gay community.

So then, why is it that the pro-gay groups keep on making the association between the repealing of the buggery law and HIV/AIDS? The premise is that homophobia drives the disease underground, because HIV-positive persons are not willing to seek treatment because of the fear of being labelled homosexual. That is simply not true.

Given that Jamaicans now know that the infection is passed by any type of sex, why should anyone with the virus feel that he would be labelled gay? Most infected persons are recorded by the health ministry to be male heterosexuals. In plain language, the largest group of people who are said to be HIV-positive in Jamaica are 'gyallis'.

Are the anti-buggery law advocates telling us, or more important, not telling us, something? Perhaps, there are some inconvenient facts. Strangely, my lazy colleagues in Jamaican media cut and paste from the standard UNAIDS documents and run the relatively useless information that the Caribbean is the region with the second-highest prevalence of the disease in the world. Yes, colleagues! We are behind only sub-Saharan Africa. So what? How does this help us? We also have the second-largest concentration of black people and the second-hottest climate. So, are we saying that hot temperatures and melanin that render us more prone?

Well, no, because again my indolent associates don't even bother to look nearer to home and examine our African American friends. Indeed, HIV prevalence among African Americans is scary and is much higher than among ours. For example, 45 per cent of all new infections among Americans in 2011 were black people. A similar number of all HIV-related deaths represent victims of African descent.

In Washington, DC, where the Obama residence is one of the few things which are white, three per cent of the population is HIV-positive. In Obamatown, with one of the greatest concentrations of black people in America, 75 per cent of those infected with HIV are African American. The American National HIV/AIDS Strategy reports that blacks "comprise the greatest proportion of HIV/AIDS cases across many transmission categories ... women, heterosexual men, injection drug users, and infants".

Yet, digging deeper into the statistics, we get to the bottom of the phenomenon, where subgroups within the category show greater risk. Intravenous drug users and sex workers are on the front line of the data. However, African American men who have sex with men (MSMs) accounted for around 73 per cent of new infections among men of colour. Black gays with HIV comprise 37 per cent of MSMs who are seropositive. Furthermore, young black MSMs have the fastest-growing infection rates, with new infections in the sub-30 age group racing up a frightening 48 per cent between 2006 and 2009.

Among the 'blacktivists' and 'blackademics' such as the (American) Association of Black Sociologists, we have long accepted that AIDS in America is a black disease and target our strategies accordingly. There is no pretence because the data do not lie. Nonetheless, we know that all social problems seem to affect black people more; we live shorter, are more unemployed, die violently more often, drop out of college more frequently, are less literate, have more unplanned babies and a slew of other 'crosses'. Poverty, marginality and ignorance all combine to exacerbate the problem, which is one of the main reasons that black people, globally, are more susceptible to the vagaries of HIV/AIDS.

Back on 'The Rock', although the majority of infections ostensibly cover male heterosexuals, gay and bisexual men are disproportionately affected. Some 32 per cent of Jamaican MSMs are HIV-positive. We can speak of homophobia until the bulls come home, but nature 'himself' has already conspired against MSMs by designing the vagina as more receptive to penetration than the rectal orifice.

The real problem is not that HIV |stigma prevents people from making a living. Treating HIV/AIDS as another chronic disease makes sense. However, it is discrimination which is the concern. I am not sure that there is a problem with discrimination in the workplace based on sexuality. Typically, there is a 'don't ask, don't tell' policy in the world of work, and more important, most persons who gain employment do so because of contacts and recommendations. However, much of the AIDS/gay-rights coalition ironically enforce workplace policies which violate our international treaties and force aspirant workers to test before being appointed.

Of note is the 'just get on with your life' campaign of 2005-2006. Ironically, when the surveys were done in 2009, it was discovered that risky behaviour had increased despite the media blitz. Conclusion? The normalising of the disease made it less frightening and, thus, some persons threw caution, and latex, to the wind.

These are serious times, and we must advise our young people, especially those who are gay, that they must know themselves and be smart. True, my opinion, as expressed on March 4, 2012, is that the horse went through the gate last year when Parliament enacted the Charter of Rights, making the buggery laws unconstitutional.

However, instead of trying to piggyback on the AIDS issue and mate it with the anti-buggery law campaign, zealots must separate them and teach their community using a 1980s USA slogan to boost their message; unless protected, "don't bend for a friend".