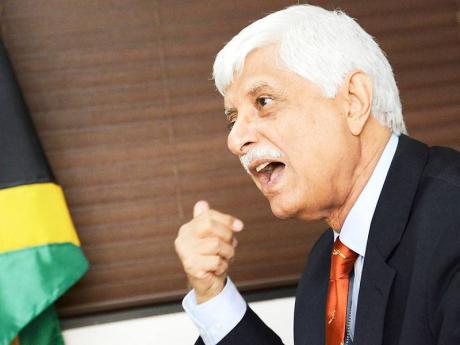 Zia Mian ... This inability to make a decision and the one-upmanship has cost this country tremendously. - Rudolph Brown/Photographer

Outgoing head of the Office of Utilities Regulation (OUR) Ahmad Zia Mian has slammed the country's political leaders for their failure to make and implement a decision on an alternative energy source for Jamaica.

Mian has also charged that the big ticket item which Energy Minister Phillip Paulwell is banking on to achieve lower electricity rates for Jamaicans - the multibillion-dollar 360-megawatt (MW) plant to be built by the Jamaica Public Service Company (JPS) - is dead.

In an exclusive interview with The Gleaner yesterday, Mian declared that the OUR has already indicated to Paulwell that it will have to return to the market and seek proposals from persons interested in constructing power plants as the JPS option is not workable.

However, Mian is not blaming the JPS.

He said the OUR wanted to the market for 480MW using any technology but this was not done as the Government was adamant that it would get liquefied natural gas (LNG) on which the JPS plant would be built to operate.

This led to the JPS being selected to construct the 360MW plant in Old Harbour, St Catherine, which was to be operated using LNG.

"You did not tell the JPS (when they were bidding) that they would have to go out and get the gas. You said you would get it, and now that they have to get it they have found that the gas is not cheap," declared Mian.

"What we (the OUR) will have to do is go out again for bids and see if someone will be interested, but the Government must not determine the technology. One should look at all possible options," added Mian, as he declared that a press release announcing the change should be out today.

Efforts to contact Paulwell were unsuccessful, but a senior official in the energy ministry told The Gleaner that a late development could save the plant which the JPS plans to build at a cost of J$52 billion.

"A JPS team met with Minister Paulwell last Friday and submitted a proposal which is going to the OUR to evaluate, so Mian is speaking without being aware of the latest developments," said the source, who asked not to be named.

When contacted by The Gleaner, JPS said it would not comment.

But Mian, who leaves office on Friday after four years in the post, is adamant that the OUR is returning to the market.

"The request for proposal is now being prepared and should be out shortly, because as far as that 360MW is concerned that is no longer there."

The former energy policy/technical adviser at the World Bank lamented that Jamaicans would continue paying high electricity rates because of the bungling of the politicians.

"But 2001-2002 came and no extension had been made, and by then the world scene had changed and we started looking at natural gas. I prepared a plan for implementation and by 2005 Jamaica should have had gas. If we had gone that route we would have saved Jamaica billions of dollars."

According to Mian, after the 2003 general election the thinking changed and the endless debate started about gas or LNG as the alternative fuel source.

"At that time, people were begging you to buy their gas and we would have been guaranteed supply at a price that would have reduced the cost of electricity significantly.

"If you had signed a long-term supply for gas in 2002-2003 you would have been laughing ... and the cost of electricity would be much cheaper.