Jamaicans continue to dominate at Carifta 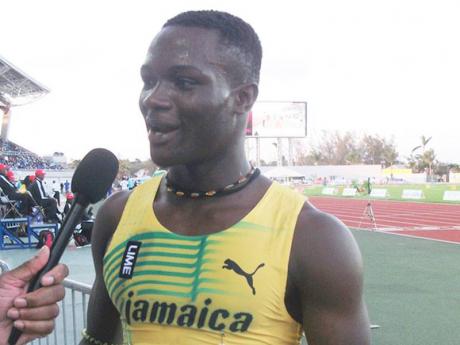 AT press time last night, Jamaica continued to rack up the medals at the Carifta Games; five coming in the intermediate hurdles with gold medals from Omar McLeod and Kimone Green helping the country's overall tally to 35; including 11 gold, 13 silver and 11 bronze.

Green was comfortable in winning the Under-20 girls' 400m hurdles, relaxing through a 59.31 seconds win with teammate Tatiana Wolfe making it one-two for Jamaica after getting the silver in 1:00.66. Tia Adana Belle of Barbados got the bronze in 1:01.36.

After victories in 2011 and 2012, McLeod made it three wins in a row in the boys' Under-20 event. Despite early pressure from Barbados' Kion Joseph, McLeod powered home in 51.46 seconds as the Bajan clocked 51.94 for the silver with bronze going to Martinique's Ludvy Vaillant in 52.31.

Jamaica's Javon Francis, who replaced Okeen Williams, fell at the eight hurdle and trailed in last.

"My plan was to just go out and execute and have fun, as I really wanted the gold. I was in great form and I wanted to end my Carifta career on a high," said McLeod.

It was a perfect start for Jamaica in the opening session, as the country's athletes picked up four early medals, including two gold and two silver to set things in motion.

There were two quinellas in the Under-17 throws; Cornwall College schoolboy Warren Barrett, son of Reggae Boyz goalkeeping coach of the same name, produced a lifetime best in the boys' Under-17 shot put, winning the event with a heave of 16.88m with team-mate Vashon MaCarthy taking silver with 16.47m with Grenada's Peter Anderson taking bronze with 15.53m.

A few hours later, it was the same result in the girls' Under-17 shot put.

Excelsior athlete Shanice Love produced a personal best of 40.16m to win the event ahead of team-mate Janelle Fullerton with 39.91m as Trinidad and Tobago's Shaiann Charles took the bronze with a throw of 39.19m.

"I feel great, I feel like a star by winning this gold medal for my country and to know that it is my first national trip and to do so in a personal best, I am even happier," said Love.