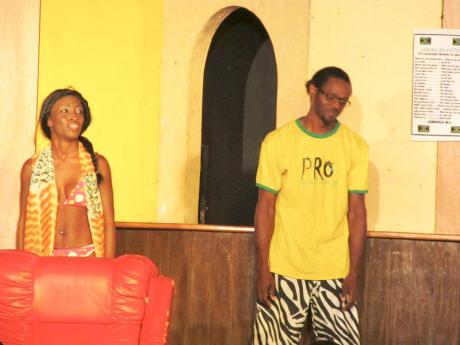 Lacy, played by Stacy Blake, remonstrates with her mild-mannered husband Howard, played by Curley Roberts, during a scene from 'Risqué' at the Stages Theatre last Saturday night. 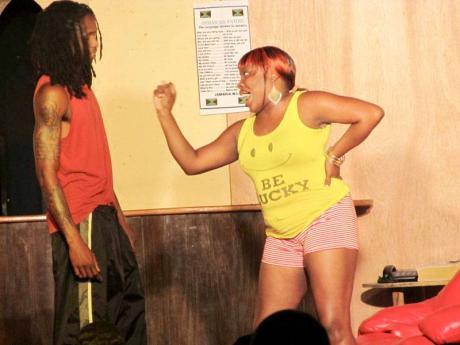 Diamond, played by Alexia Stewart, tells Aston McIntosh, played by Marlon Brown, what she thinks of a situation during a scene from 'Risqué' at the Stages Theatre last Saturday night. Photos by Marcia Rowe 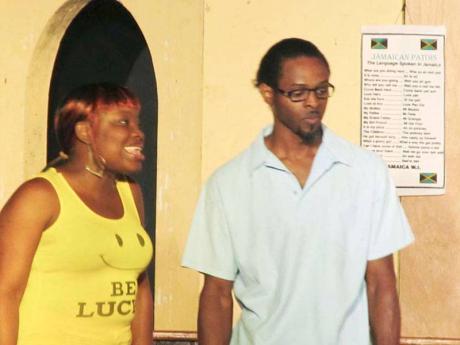 Howard Reece, played by Curley Roberts, is wooed by Diamond, played by Alexia Stewart, during a scene from 'Risqué' at the Stages Theatre last Saturday night.
1
2
3

Playwright David Tulloch described his avant-garde production Risqué shown at Stages Theatre, New Kingston, on Saturday as "a play never before shown on a Jamaican stage". While this form of theatre is not new to the Jamaican stage, the director was correct in his assessment.

"It's my style, I like to be different. I look for unique things that's not already out there. It's a small industry, it's a small market. To keep it going, you have to come with innovative ideas, and I thought of it (nudity on stage), and it has never been done, and I said why not? There are movies that are 21 and over, why not have a play."

He maintained his innovative ideas throughout the production, from the creatively arranged singing of Jamaica's National Anthem to the preshow advisory and ultimately, the imaginative use of scamming, a criminal activity plaguing the island.

Along with a confident cast, Tulloch used raunchy seasons to open a window into ideas around marriage and the complexity of the criminal mind, all ending with a shocking reality.

The plot unfolds at the Risqué Villa in Negril and has many twists, turns, and contradictions.

In brief, an unsuspecting financier Howard Reece (Curley Roberts), who resides in Ironshore, responds to an advertisement that promises a solution to his marital issues.

In a one-month-old marriage, to waitress Lacy (Stacy Blake) that has produced little love, Reece buys into the advertisement and, along with his wife, arrives at the villa.

There he meets Kim (Nasarah Kerr), the new receptionist, who informs them that they will be sharing the villa with another "married couple" Diamond (Alexia Stewart) and Aston McIntosh (Marlon Brown).

The couple aren't really married and turn out to be con-artists. Subsequently, Howard learns that he has been duped in more ways than one.

Tulloch, in a stroke of creative ingenuity, used the pace of his script to mirror the pace of the scam.

The slow-paced first act, with emphasis on solving the Reeces' marital problem, was superficial but generated much laughter. The fast-paced second act, on the other hand, with moments of suspense, twists and turns capture the real danger of Howard's association with the scammers.

The language of Risqué is in keeping with its title; very adult in content, often dipping into the well of Jamaican expletives to colour the moments most in need of them.

But the cast of Roberts, Stewart, Blake, and Brown had little difficulty giving the right colouring to their lines.

Their confidence in executing their director's bold methods made complex roles more believable.

Roberts, who played the tragic Howard, remained true to his role. Brown, who was well cast, gave the flamboyant Aston the right treatment and Blake whose character, Lacy, was the most complex of all did well to show certain changes necessary to the movement of the plot.

Lacy played the seemingly emotionally tortured character with conviction. However, while Stewart captured the essence of Diamond, the survivor, her voice was too strong in the first act, resulting in a number of inaudible lines.

Tulloch was also responsible for the set and costume. As was the case with his directing, the costumes were quite appropriate. The supposedly run-down Risqué Villa was not captured in the unpainted plywood board, otherwise it was a workable set.

The Saturday showing of the production was its only one in Kingston. It returns to Fairfield Theatre in Montego Bay.

Risqué provides much to think about, but it is not for the faint of heart.