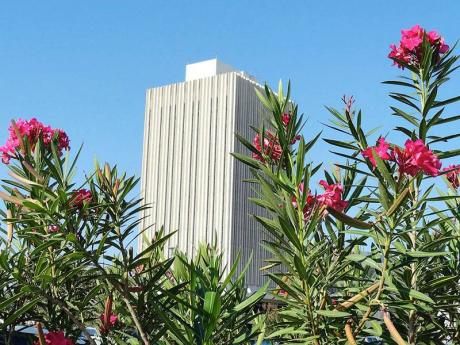 The Bank of Jamaica. - Photo by Duncan Sutherland

The turning point happened on April 2, right after the Easter holiday break.

Foreign-exchange traders said nothing unusual happened that day - neither in the brokerage community nor activity at the central bank.

But at the close of trading, Jamaica's currency market had experienced a change of direction. Cash flowed freely into the market totalling US$62 million from sellers to more than double the US$29 million of sales on the previous trading day.

Some analysts say it might not be related to any one event, but a confluence of needs, such as conversions to JMD to deal with expenses.

The International Monetary Fund's April 8 announcement that its staff would recommend approval of a bailout for Jamaica happened a full week later, which continued to spur confidence and kept the forex market oiled.

The Bank of Jamaica (BOJ) followed up with a special USD-indexed bond issue to pull Jamaican-dollar liquidity from the market. Investors converted US dollars to JMD in order to subscribe, and on the day the bond closed, the central bank's daily forex market report showed that a total of US$80 million was sold into the market on that day - setting a year-to-date record.

The BOJ executed its second manoeuvre on April 15 when it placed three special CDs on the market with tenures of six months, nine months, and 18 months.

The activity has served to cauterise the rapid slide in the value of the JMD seen in the first three months of the year. And the local dollar has been appreciating over the past week. It traded at a weighted average rate of J$99.48 on Tuesday, having previously hit a low of US$99.81.

BOJ data show that for the months of January, February and March, the market was mostly characterised by net-buying - meaning that the players were buying up more US dollars than the amount sold into the market daily.

For the 61 trading days over the quarter, 38 of them reported greater buying activity than sales - the market bought up US$1.67 billion in total, but sales lagged at US$1.64 billion.

Overall, the market bought US$25.437 million more than dollars sold.

However, April 2 has seen a change in the trajectory with the market now characterised by net-selling.

Of the 12 trade days up to mid-month, only on two of those days did the market buy more US dollars than was sold.

Of note, much of the selling activity over the period April 9-11 was influenced by the USD-indexed bond placed on the market for unlimited subscription by the BOJ.

The issue raised J$8.8 billion, or US$90 million equivalent.

Additionally, the president and CEO of Stocks and Securities Limited, Mark Croskery, associates the pattern of sale in the market to investors converting a portion of their USD portfolios to settle JMD tax obligations.

One analyst, who requested anonymity, said the activity is the first sign of confidence returning, which changes the climate in which speculators thrive.

"Fundamentally, when there is a net buy, it means that the dollar is going to depreciate, and net sell means that people anticipate a revaluation, so they are willing to let go of their US dollars now. They would benefit from the lower rate they would have accumulated the funds at earlier in the year," the analyst said.

"A speculator makes money when people act irrationally. So because there was the uncertainty if the agreement would happen, everybody wanted to get US dollars to put away and this created an artificial demand. Now people hear that the agreement is coming and they are more relaxed. So the speculator wins by selling what they have now after the exchange rate had taken the course it did," the analyst said.

The rapid depreciation continued in the month of April, but the pace has slowed somewhat.

BOJ Governor Brian Wynter has said that the dollar is more competitive now at its current levels.

"The market was worried that you might not get an agreement and it created an artificial demand, so a lot of persons were buying and holding, waiting for the right time to sell - speculators we call them - and they are able to make a nice spread," the analyst said.

A speculator who used J$100 million to buy US dollars at the rate of the J$93 in January would have received just over US$1.07 million.

If those funds were converted to JMD, say, at the average rate of J$99, the speculator would have made more than J$6 million on the transaction.

Other players in the market say that the announcement by the IMF has had the "single most outstanding" influence on the market since the start of the year.

Charles Ross, managing director of Sterling Asset Management Limited, said people believe that the IMF deal "is around the corner" and are now willing to sell some of their foreign-exchange holdings "since the demand is out there and they would be selling back at a higher price than they paid for it".

Croskery was a bit more cautious.

"That positive announcement by the IMF brought some amount of stability in the market. I think it might be a little bullish to say it regained confidence, but we have definitely seen where the market is settling down. You see it in the reduction taking place in the foreign-exchange rate and the fact that people are able to get foreign exchange now," he said.