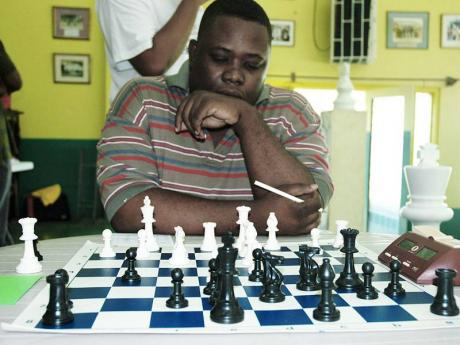 The National Chess Championships is set to kick off this weekend with a fraction of the player numbers that participated last year. Noteworthy is the absence of defending champion NM Andrew Mellace along with Jamaica's two top-rated players, IM Jomo Pitterson and FM Warren Elliot.

He did make requests for his games to be postponed until his return from national duties but was told by tournament organisers that this was not possible. So NM Mellace will be off to represent Jamaica in a nine-round tournament from April 27 to May 2. Another Jamaican who will be playing in the Barbadian tournament is FM Shane Matthews who now resides there. NM Mellace will play in the Challengers section while FM Matthews will compete in the Masters sections where he will meet a slew of strong Caribbean players and a GrandMaster.

When ChessMate spoke with the JCF's Robert Wheeler, he explained that NM Mellace had to make the choice given the timing of the tournaments and the federation could not reschedule the Nationals to another time. Mr Wheeler also suggested that the international exposure was a positive for NM Mellace and the country.

But another top player who is out identified a triad of issues which have led to his decision not to participate. FM Elliot said he is concerned about the product itself. "The first invitation sent out was a Swiss ... I don't think a National Champion should be selected from a Swiss system unless the pool of top players is too large (not the case in Jamaica)," said FM Elliot. He added too that the lack of a prize fund and a decline in the participation of top players also guided his decision not to participate.

Additionally it is also understood that the JCF tightened up on late registrations and late entry fee payments so players who had not registered and paid their fees before last Friday's deadline were not allowed to enter.

So, from a record-breaking field of 24 players last year, there are only 10 players set to battle for national honours in 2013, from the 48 who were invited to participate. The list of the select 10 are:

Also, while the initial announcement was for a Swiss round tournament, it is understood that with the decline in entries, the tournament has now been converted to a round robin among the 10 players. The Nationals will run from April 26 to May 12. Games will be played at Liguanea Club and Norman Manley Law School.

National Championships: April 26 - May 12 (venues to be announced)