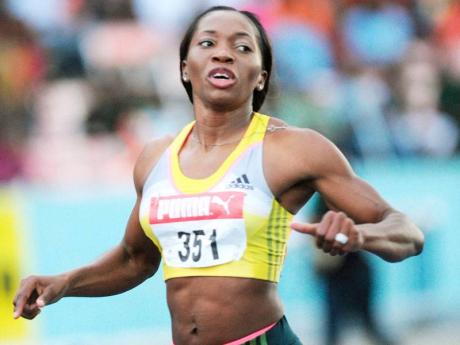 ... Jamaican star opens up about fight against deadly disease

After a one-year fight with breast cancer, leading Jamaican 400m athlete Novlene Williams-Mills has finally broken her silence in a heart-warming revelation of her life-changing struggles.

But her real challenge started long before, on June 25, 2012, when she was diagnosed with breast cancer. It has been a non-stop struggle since.

As she gets ready to, once again, pull on the Jamaican colours in front of the world, the athlete is this time running for a lot more than herself and her country.

"Moscow will be for all the breast cancer survivors out there. I want them to know it's still possible," she told UK publication The Daily Mail.

"I'm still one of the top 400m runners in the world and I want to see what I can do. Moscow will be for all the breast cancer survivors out there. I want them to know it's still possible," she emphasised.

Williams-Mills' diagnosis came just over a month before the start of the London Olympics last year, where she finished fifth in the 400m finals before helping Jamaica to a third-place finish in the 4x400m relay.

"That's everybody's dream, to run at the Olympics. But I was thinking about my hurdles that I had to come back to fight. I was thinking: 'Am I going to survive this?'

"My teammates in the relay did not know. But I was standing on the podium and I didn't know if I would ever run another race.

"It feels like your own body has betrayed you, like I've been stabbed; I'm an athlete. I work out, I train. It can't be possible," she reflected.

That was her initial reaction, and while she kept the information close to her chest - telling only her husband, family and close friends - Williams-Mills, who lost her older sister to ovarian cancer in 2010, went head-on into the fight, leaning only on those close to her.

Three days after the Games (London), a small lump was removed from her breast and then she had a double mastectomy. This was followed by another operation to remove remaining cancerous cells and then reconstructive surgery. She had her final operation on January 18, according to the article.

"It's a very high-risk, aggressive cancer and I had to approach it aggressively. A double mastectomy eliminated my chance of getting it from 99 per cent to maybe three per cent," she added.

"I wanted to win and I had to fight with every single possible thing that I have," Williams-Mills added. "The mastectomy was scary because this is what makes me a lady. What am I going to look like?

"It was very difficult. I want to have kids one day and you see all those mothers out there nursing and I'm not going to be able to do that," said Williams-Mills. "I hoped my husband still loved me the same. We met when I was like this and now he's seeing a whole different person. But I didn't have to worry about him. He was my nurse, my rock."

Today she competes. She runs for victory not only for herself, but also for the millions of women who have faced the uncertainty of cancer - to show that life continues.

"For some people, being diagnosed with breast cancer means their world ends. But you're still that same person. A piece of you is taken away, but it doesn't mean life is over," said a resolute Williams-Mills.

"My friend, a breast cancer survivor, said, 'So, you've just run in front of how many millions of people at the Olympics? And this is what you're afraid of? Just think of your competitors that you hate the most and love to beat'," Williams-Mills revealed.

Now, even more than ever, regardless of her final position in Moscow, Williams-Mills - who won a 400m bronze medal at the 2007 World Championships in Osaka - will always be a champion.