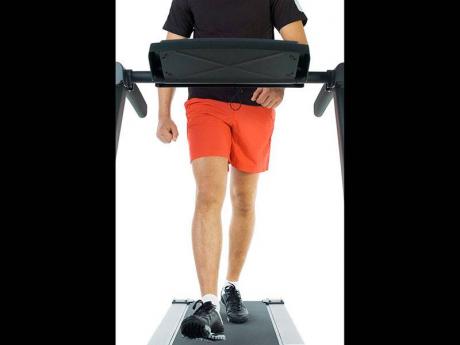 The structure and function of the penis are unique. Similarly, its response to physical exercise differ somewhat when compared to skeletal muscles of our arms, legs and abdomen.

The penis is primarily made up of connective and erectile tissues, blood vessels and nerve tissue. These inner structures are surrounded by a robust sheet of elastic connective tissue. The penis has tubes of spongy tissues and a tight mesh structure or network of space filled with blood vessels with very elastic walls. The muscles in the penis are in the walls of the blood vessels, they regulate blood flow and penis size, intermittently, from erect to non-erect.

Exercise by itself does not make the size smaller.

Men have a relatively permanent maximum erect and minimum non-erect penis size that does not change easily in the short run. However, the penis size will vary temporarily, from time to time, based on the threshold of stimulation.

Penis size will become smaller because of diversion of blood supply. For example, when blood is siphoned off to the skeletal muscles to perform movements of the arms, legs and even deep breathing during exercise. On completion of the activity, your body will return to the normal resting state, likewise blood flow will return to its normal state, including blood flow to the penis, which will impact its size.

Penis size increases as in an erection, primarily as a result of excitatory nerve impulses and an increase in blood flow. The penis has a rich supply of nerves that branch to all parts, especially to the tiny muscle sheet in the connective tissue. Nerve impulses impact blood flow, which makes it a significant contributor to the changes that are recognised from time to time in the size of the penis.

Exercise improves blood circulation, which makes it even better during an erection when more blood flows in and less blood flows out of penis. This makes for a much better erection and the correction of problems such as erectile dysfunction.

Improved blood flow prevents damage to the arteries that compromises blood circulation in the penis, the subsequent volume of blood in the penis and the relevant increases in the degree of erection and the equivalent adjustment in penis size.

Physical exercise does not reduce the permanent minimum size of the penis nor does exercise increases its maximum potential length or circumference. Exercise improves one's ability to achieve maximum penis length and circumference more easily.

It must be noted, however, that men who exercise in concert with steroids or supplements that have ingredients that mimic steroid capabilities, knowingly or unknowingly, as seen in some bodybuilders, experience a decrease in the size of the penis. It is not the exercise in itself that causes the reduction in size.

Some men are so concerned about the size of their penis reducing that they have refused to exercise, but they need to realise that lack of a structured exercise programme can lead to erectile dysfunction, which would be worse than their unfounded fears.

Exercise does not reduce the size of the penis, but in fact allows the man to have a better, firmer erection, as well as enables him to last longer and have more stamina.