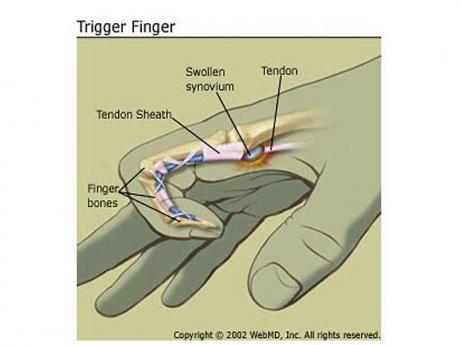 Trigger finger, commonly called 'Drop Finger', and also known as stenosing tenosynovitis (stuh-NO-sing ten-o-sin-o-VIE-tis), occurs when the finger or thumb gets stuck in a bent position and then straightens with a snap. This is caused by the narrowing of the sheath that surrounds the tendon (fibrous cords attaching muscle to bone) in the affected finger.

The lubricating fluid lining the protective sheath which surrounds the tendon allows the tendon to glide smoothly within its protective sheath as the finger is bent or straightened. Frequent inflammation causes narrowing and constriction of the space within the tendon sheath, preventing the smooth glide of the tendon, at times catching the finger in a bent position before popping straight. Prolonged inflammation causes scarring and thickening (fibrosis) and bumps (nodules) can form.

Signs and symptoms of a trigger finger may be mild or severe. These include:

Finger stiffness, especially in the morning

A popping or clicking sensation with movement of the finger

Tenderness or a bump (nodule) at the base of the finger

Finger catching or locking in a bent position, which later suddenly pops straight

Finger locked in a bent position, which is unable to be straightened

The dominant hand, particularly the thumb, middle or ring finger. More than one finger or hand may be affected at a time.

A number of acupuncture points can be found on the hand and are used to relieve symptoms of a trigger finger.

Baxie Points: located between each finger at their base

Jing Well: located at the fingertips and used in cases of severe pain

Points on the sides of the fingers are also used for a variety of problems affecting the fingers, including pain and swelling.

In addition to acupuncture points on the hand, points at the wrist and along the arm which fall on the meridian/pathway related to the affected finger are also needled and stimulated for relief.

Once acupuncture needles have been inserted in the selected points on the hand, a mild electrical charge is usually applied to the needles to enhance the stimulation and effectiveness of the treatment.

In cases where there is swelling in the joint or sensitivity to cold conditions, moxibustion is applied. Moxibustion is the process of applying the 'moxa' herb to the head of the acupuncture needle and allowing it to burn in order to gently warm the acupuncture point to assist in pain relief and reduce swelling.

Herbal formulas may be taken to reduce inflammation and break up nodules which may have formed in the affected finger.

The course of treatment will depend on the severity of the condition. Acupuncture is done once or twice weekly until resolved.