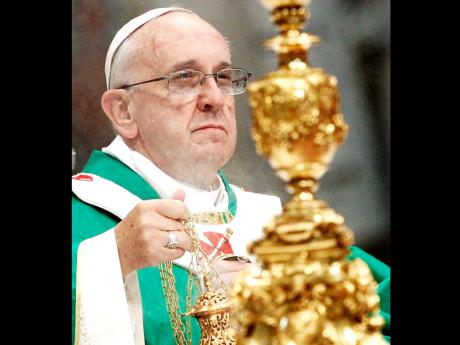 Pope Francis celebrates a Mass with seminarians and novices in St Peter's Basilica at the Vatican.

Pope Francis has removed a Roman Catholic bishop in Peru who an influential former prelate says is suspected of sexually abusing minors.

Miranda is only the second bishop known to have been removed in recent times by the Vatican over sex-abuse allegations.

The Rev Percy Quispe, spokesman for the archdiocese of Ayacucho where Miranda was assigned, confirmed his removal to The Associated Press on Saturday.

He said Miranda departed in July but did not specify the reason.

Miranda had, since 2007, led the youth ministry of Peru's bishops' commission. He was a close associate of the powerful Cardinal Juan Cipriani of Lima, sharing membership in the conservative Opus Dei organisation.

The regional prosecutor's office said in a statement on Friday that an investigation had been opened into Miranda, but did not specify the subject.

Cipriani expressed displeasure with Bambaren on Saturday in a radio interview from the Vatican, where he was to meet with the pope on Monday.

"I don't think it's in good taste for a retired bishop to have made an accusation that is somewhat exaggerated or at the very least strong," he said.

COULD NOT BE REACHED

Bambaren, an 85-year-old Jesuit, did not return AP phone calls seeking comment and Quispe said the archbishop of Ayacucho, Miranda's former superior, was traveling abroad and could not be reached.

The Vatican also did not respond to AP requests for comment on the case.

Opus Dei issued a statement on Friday saying that Miranda "denied any crime having to do with minors" but said it had very little information about his situation. Attempts to reach Opus Dei officials to try to determine Miranda's whereabouts were unsuccessful.

Miranda had spent his career in Peru's Quechua-speaking southern Andes.

Earlier this month, the Vatican confirmed that its ambassador to the Dominican Republic, Jozef Wesolowski, had been recalled and removed from his job amid a Vatican and Dominican investigation into allegations of abuse.

For decades, bishops have been virtually untouchable when it comes to Vatican discipline as they function very much as kings in their own diocesan fiefdoms.

The most prominent bishop to have been removed for alleged abuse was the archbishop of Vienna, Hans Hermann Groer, two decades ago.