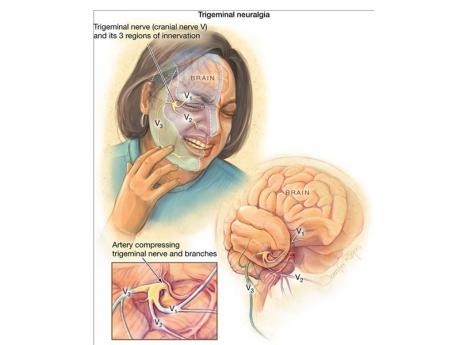 It was the distinct feeling of an electric shock to my face about three years ago that prompted me that something was not right. Months later, it happened again, with more frequency and intensity. With no real answer from doctors about what could be causing this strange, uncomfortable feeling in my face, I took to my own research.

In my sleuthing, I came across a condition that used words like drilling, shocking and burning - words that aptly described what I was feeling.

They were the symptoms of trigeminal neuralgia (TN).

I discovered that TN is a rare, chronic neuropathic disorder which affects the trigeminal nerve, usually on one side of the face. It was described as the most painful condition known to medical practice and has been nicknamed the 'suicide disease' because of the many persons who resort to suicide after years of untreated depression and excruciating pain.

TN manifests as sudden sharp, stabbing or shooting pain or a constant burning sensation. Pain can be triggered by ordinary daily activities such as washing the face, brushing teeth, eating, drinking or even talking.

Sufferers of TN - quoted to be about one in 15,000 people - experience varying degrees of pain and often go misdiagnosed and untreated because of insufficient knowledge of the disease. Many people have extensive dental work and visit several doctors from different specialities before ever being referred to a neurologist.

The disabling effects of this disease go beyond the physical. Fear of an impending attack or shock predisposes persons to depression, anxiety, and dependence on medication, expanding the need for further health care and renders many people unable to work or leave home.

While there is no known cure, the first line of treatment usually begins with medication, ranging from anti-convulsants to opiates. If medication is unsuccessful, surgery may be offered, aimed at giving a possible period of reduced pain.

TNNME, a global campaign initiative started by a TN patient, has collected more than 8,000 names on an online petition to present to the World Health Organization (WHO) so that the illness can be acknowledged as part of its Health Topics List.

WHO recognition would reduce the barriers to effective health care, increase understanding and give individuals and health-care providers access to resources and information. It would also enable researchers to conduct clinical trials to help find reliable treatments. This initiative has brought hope to many persons who suffer daily with this condition.

After a year of seeing doctors, being prescribed vitamins and my condition misdiagnosed as a sinus problem, I now see a reliable team of consultant neurologists who are helping me to manage my condition.

My experience is not unique. It only emphasises the necessity for greater awareness.

This year, October 7 was recognised as the first International Awareness Day for Trigeminal Neuralgia. Cities and buildings all over the world lit up teal.

I encourage more persons to sign the petition at http://www.tnnme.com.