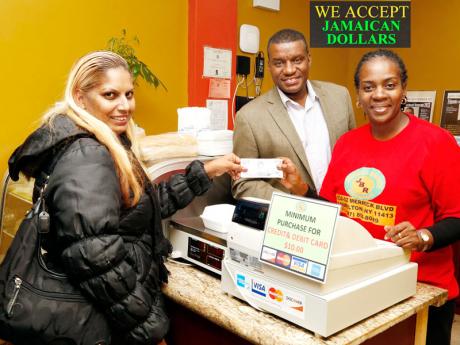 "Thousands of Jamaicans from the New York area travel back and forth to the island every week," Duncan, a former city council chief of staff, explained. "Most of them bring back unused Jamaican currency and it makes no sense for the bills to sit in wallets for long periods. We want people to have the option of spending those dollars here; I will give 10 per cent of the intake to charities in Jamaica, starting with the Shortwood Practising School in St Andrew," said Duncan, who is from the Shortwood/Grants Pen area of St Andrew.

A bank currency conversion fee to exchange the Jamaican dollar intake to United States currency with either TD Bank or Chase in New York will also be factored into the rate. Cash registers will be programmed to tabulate and accept the new currency.

"When the restaurant opened in June, both The Gleaner and TVJ carried stories, and passengers from Jamaica coming through the nearby JFK airport headed here directly from the plane to eat; many would have paid in Jamaican dollars if they could," Duncan stated.

In a fiercely competitive market, Jamaica Breeze holds the distinction of becoming an overnight success. This is attributed to its friendly, unpretentious 'back-a-yard' atmosphere, dazzling variety of pay-by-the-pound daily dishes, and the deliriously delicious food. The self-serve restaurant offers some 45 to 60 dishes daily.

"Being able to use my Jamaican dollars here is a matter of national pride," said regular diner Bishon Crabbe. "It reminds me that my own dollar has value. Maybe this clever plan will breathe new life into our struggling dollar," she added.