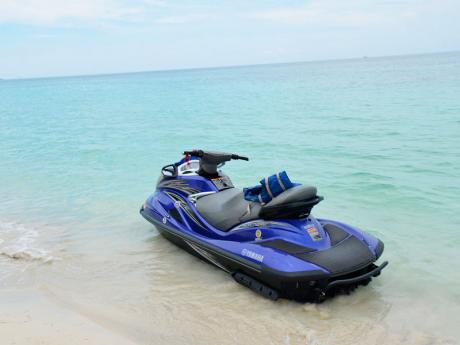 Tomas Torres Castillo, an American tourist from Las Vegas, Nevada, was killed in the resort town of Negril, Westmoreland, yesterday when a jet ski slammed into him while he was swimming at the Travellers Beach Resort.

Castillo, who was on vacation in the resort town with his wife, Maria, was a guest at the Travellers Beach Resort, where he had been staying since last Friday.

According to reports, shortly after midday, Castillo was swimming when he was hit by the speeding jet ski, which did not stop. He was rushed to the Savanna-la-Mar Hospital, where he was reportedly pronounced dead on arrival.

"As far as I know about what happened today, one of my guests was out there swimming and he was allegedly hit by a jet ski operator," said Wintrope Wellingtion, part owner of the Travellers Beach Resort.

"The incident was witnessed by another couple who is staying at my hotel ... . They told me they saw the jet ski hit the guest and just kept on driving," added Wellington.

In pointing to his frustration with jet skis being driven in proximity to the areas reserved for swimming, Wellington said he was gravely concerned about the unregulated operations of the vehicles in the resort town.

"There has always been a concern about jet skis. That has been something that the Negril community has been talking about and has advocated against for years and years and years," said Wellington. "It is unfortunate that the situation in the past, where tourists have got seriously injured or hurt, that nothing, in my opinion, substantial has been done to actually protect us from something like this."

In August last year, six-year-old Tonoya Hyman was killed in a freak accident in which she and her sister were hit when an out-of-control jet ski raced unto the beach. It was not clear if the operator was aboard at the time.

In the aftermath of numerous complaints about jet skis being operated in areas reserved for swimming, Tourism Minister Wykeham McNeill addressed the House of Representatives in October, announcing a six-month suspension on the importation of all jet skis for commercial use.

McNeill also announced that the Ministry of Tourism had held talks with the marine police and the Jamaica Defence Force Coastguard about actions to be taken against illegal jet ski operators.

Yesterday's accident, which has cast a pall of gloom over the resort town, has left stakeholders in the jet ski sector in grief as they ponder the future of the business.

"I am very sorry to hear about that," said one operator, who asked not to be identified. "Everywhere you go, you find regulations, but people don't abide by them sometimes, so accidents can happen. I only hope that they don't ban jet ski operation because a lot of people depend on it for their livelihood."

Efforts to get a comment from the police, who were early on the scene and were observed conducting their investigations, proved futile as an investigating officer flatly refused to answer questions posed.