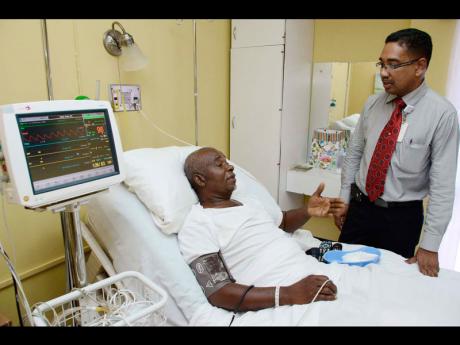 Dr Roger Irvine talks with his patient Herold Russell, on whom he did the first open-heart surgery at the Medical Associates Hospital, Tangerine Place, in St Andrew, yesterday. - Winston Sill/Freelance Photographer

After three mild heart attacks and suffering from chronic heart disease as a
result of high cholesterol for 11 years, an emotional 61-year-old Herold
Russell was at a loss for words in expressing his gratitude for the second shot
he got at life.


One week after being the first patient to undergo private
coronary artery bypass graft surgery at Medical Associates, Russell is beaming
with joy.

“It has been wonderful. I don’t think I could ask for more.
I knew I had the right person in charge and he was supported by the right
people. I had no fear whatsoever going into the surgery. Dr. Roger Irvine is a
miracle man,” Russell shared with The Gleaner from his hospital bed at the St.
Andrew-based private hospital.

“I give thanks to God. I feel triple blessed. Now I am going to do my best to
live a better lifestyle, continue my physiotherapy, eat right, exercise and
take my medication,” said the former trucker, who once traveled across the
United States earning a living.

“I am looking forward to a much better life, free of all the suffering I was
going through – the pain, shortness of breath, unable to do simply things. I
wouldn’t mind another 61 years,” he added with laughter.

At a critical stage, Russell was on a waiting list at the University of the
West Indies (UHWI) for open-heart surgery. He said relatives insisted he do the
complicated, risky surgery overseas, but he had every faith it could be done
successfully in Jamaica.

When renowned cardio-thoracic surgeon Dr. Roger Irvine contacted him to be the
first patient to participate in the breakthrough procedure at Medical
Associates, Russell agreed without hesitation.

On March 12, the hospital created history when Irvine,
assisted by cardio-thoracic surgeon Dr. Moses deGraft-Johnson from the US,
performed the first private coronary artery bypass graft surgery. Up to that
point, the delicate surgery was only available at the UHWI.

A first for Jamaica was harvesting the vein needed for the
procedure endoscopically. Typically, the vein is harvested by surgically
cutting the patient from the thigh to the ankle.

“We knew from before hand that we were going to embark on
something completely different to what was being offered in Jamaica and I feel
great that we have done what we set out to do. I am very proud of the team
here,” said Irving.

Head of the cardiac programme at Medical Associates since
last year September, Irving said it has taken a lot of resources and
preparation to get the hospital to the point of being able to carry out an
intricate procedure as open-heart surgery.

“Developing the capability for open-heart surgery is a big
jump for any hospital. A lot of things have to be in place and it puts a lot of
demand on the entire hospital system and all the support services required to
make it happen. Everything had to be perfect,” he said.

Privately open-heart surgery can cost the patient
approximately $4 million, while at the public UHWI it is just over $1 million.

Irvine, who has specialized in cardiac surgery since 1992,
performed his first unassisted cardiac surgery 15 years ago at UHWI and since
then he has done approximately 60 per year.

The specialist said there is an alarming increase in heart disease, not just in
Jamaica, which has resulted in a number of persons at a much younger age
needing cardiac surgery.

“When I started out, most of the operations we were
doing was in the 70-80 age group. These days most operations I do are in the
40-60 age group,” Irving noted.

“Coronary artery disease is on the rise, worldwide. It is in
fact a worldwide epidemic, increasing at an alarming rate. More people die of
heart disease than any other cause.”

He added, “Untreated diabetes and hypertension are the main
causes. Then you add worsening of the quality of food we are eating, with a lot
of fatty acids, people exercising less, cigarette smoke as well as
hypercholesterolemia (high cholesterol) – these are the things causing an
increase in the number of coronary artery disease,” the doctor lamented.

Now seeing more patients because of heart disease, Irving
said when he started out he was seeing one person every few weeks with the
ailment. Now he was seeing up to ten patients every day.

“That is an enormous increase. That is the type of epidemic
we are seeing,” said the doctor.

One of three specialists now operating in Jamaica in this
area of expertise, Irving has worked at UHWI, Bustamante Hospital for Children
and the National Chest Hospital.

Still performing the surgeries at UHWI, he said there was a long waiting list for cardiac surgery in Jamaica. However, UHWI is maxing out at approximately 100 surgeries per year.

“According to the World Health Organisation standards, Jamaica with a
population of 2.7 million should be doing at least 1,500 to 2,000 cases per
year. Hence the reason for trying to develop other centres excellence. More
people are dying than should be because they cannot get the surgery done. There
are a lot of patients out there who needs to be treated,” he said.

He said he was now working to create a first rate cardiac, surgical and
diagnostic unit at Medical Associates.

“This surgery has improved Mr. Russell’s quality of life by
leaps and bounds. He now needs to practice proper lifestyle choices, keep his
cholesterol down and maintain his treatment, which will see him living a
longer, better life,” noted the doctor.