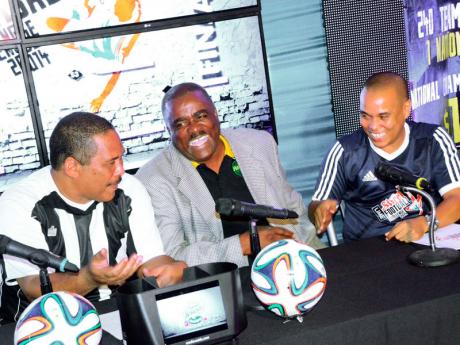 Eagles are unbeaten in four matches, having stopped Mystix 7-4 in their most recent match at Hughenden Plaza on May 4 in Zone 'A'. On the same day, Eastern All-Stars defeated Mister C from Spanish Town 6-5 (6-4) in a home match at Bourbon House, east Kingston, while Starliner beat the Dip from Gregory Park 7-4. Eastern have won all three matches in Zone 'A'.

In the two matches played last Sunday, Mystix came from behind in dramatic fashion to beat Mercury 6-5, after trailing 3-5 going into the ninth game. Given this situation, Mystix, the home team, had to win the last three games to secure victory, and their three national singles champions - Exle James, Charles Service and Carlton Blake - rose to the occasion by guiding their team to victory.

Two more matches are scheduled for tomorrow - Starliner vs Mystix at 112A Waltham Park Road and Mister C vs Rowe's Strikers at Brunswick Avenue in Spanish Town, starting at 2 p.m.

In tomorrow's opening matches, Spanish Grain Store will oppose Sutherland Global Services in Division Two action at 2 p.m. and this will be followed by the Division One encounter between Port Authority and National Commercial Bank at 4 p.m.

The competition continues on Monday afternoon with two Division One matches - The Gleaner up against National Water Commission (NWC) at Emmet Park, and Metrodade Security vs Jamaica Fire Brigade at Molynes playing field, both starting at 4 p.m.

The Gleaner unbeaten in BH domino

Former champions The Gleaner made it two wins from as many matches in Division One of the Wray & Nephew White Overproof Rum Business House domino competition on Friday, May 9, thanks to a 146-132 victory over Cement Company in an away match at Rockfort.

The Gleaner trailed their opponents in the first half to be eight adrift at the interval, but came back strongly in the second half to win by 14 points. The Gleaner had beaten Courts 153-130 in their opening round fixture at The Gleaner Sports Club.

The Leander Marshall-sponsored Portmore Under-13 Football League semi-finals will be played this afternoon at Cumberland High School field.

Favourites Edgewater FC, which topped the preliminaries with 13 points, will face Racing United, which finished fourth, at 1 p.m., while second-place Portmore United will face third-ranked Waterford at 3 p.m., at the same venue.

Portmore will want to do well in this competition to put a smile back on the face of their fans, since their senior team was relegated to the St Catherine FA Major League this season. In games last Saturday, Edgewater tagged Waterford 2-0 and Portmore clipped Westport 1-0.

Leaders Fort International (65 points), playing on their home turf at Passagefort Drive, will flex their muscles tomorrow as they take on Giants in one of eight matches in the Wray & Nephew White Rum-sponsored Portmore Domino League.

Last Sunday, Fort got free points as Prozz and Conns weren't able to field a team. Second-place team Eradication (58) clash with joint third-place Eagle View (55) in one of the most anticipated games of the season, at Gregory Park.

Independence City and Ascot Primary advanced to the second round of the St Catherine leg of the JNBS Primary cricket competition, following their good form in preliminary, round matches last Thursday. Independence City copped two wins from as many games. In the first, they defeated Port Henderson in a super over, scoring 10 runs to their opponents' seven. Both schools made 39 runs in five overs. In the second match, Independence City defeated Gregory Park by 10 wickets. Gregory Park made 29-1 in five overs and Independence City replied with 30 without loss off three overs. Oshane Love top-scored with 13 runs (three fours). Ascot Primary 35-0 beat Bridgeport (33-3), by 10 wickets. Chadrick Deacon (15) made most runs for Ascot.

The teams will now match skills with two schools from Spanish Town, with the winner set to advance to the all-island final.

Portsmouth on top in Primary football

Portmouth Basic School were the biggest winners on the opening day of the inaugural Institute of Sports (INSPORTS) Little League football competition for Basic and Pre-schoolers at the Ferdie Neita Park in Braeton last Wednesday. Portsmouth Basic, playing in Zone One, defeated Glowell Preparatory 4-0, while in the other Zone One match, Silverstone and Elim drew 1-1.

In Zone Two, Holy Spirit Basic blanked Bridgeport Basic 3-0 and Harvest Temple and Aintree Basic drew 1-1. The competition got under way with a dress parade and the opening set of matches, with 14 teams present. The league continues on Monday.