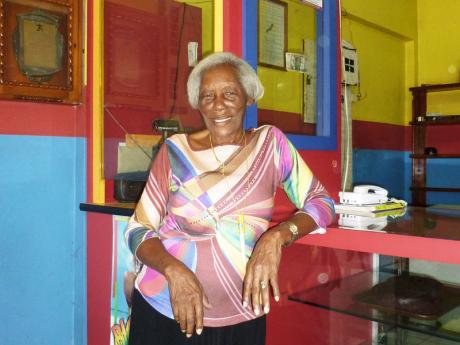 The 88-year-old businesswoman owns and manages one of the town's longest-running eateries, Essie's Faith Restaurant, and has a wealth of knowledge about the community she serves.

She told The Gleaner: "My earliest memory of Port Maria is back in the 1950s, or it may have been before, when there was a water wash and the place was flooded. We had to take a boat to come through the town.

"The flooding has been going on for a long time. The problem was fixed some years ago by St Mary MP Wycliffe Martin and it was fine until recently, since we've had these floods."

Over the last 50 years, Thompson has run several businesses in and around Port Maria and has earned a reputation as one of the town's most honest and hard-working traders.

She said: "Originally, I was a hairdresser and beautician, and then around 1962 or 1963, I switched to business, because that wasn't turning over fast enough.

"I decided to go into business because that's what I grew up on; members of my family were bakers and I watched them."

"I decided to open the restaurant in 1986. I started this place with my husband, but just as we started, he took sick and died, so I built this place by myself.

"When my husband and I first started, we didn't have any money, but I said, 'Let us try'. I prayed and asked the Lord, 'What should I do?' And He said, 'I was going to help you build, so go on'.

"I walked around and started asking people how much they thought the restaurant would cost to build and listened to what they said, even though I didn't have the first farthing.

"Then I remembered that, when I was working as a beautician, one of the ladies I taught was married to a builder. I went and spoke to him and he said, 'Yes Miss Essie, you're good woman. You taught my wife without charging her, so I will come and help you'."

Another lifelong Port Maria resident, Pardella Brown, explains that, irrespective of how distant and disparate locals may appear, the community remains close and tightly knit.

Brown, who works as secretary to the custos of St Mary, Jeffrey McKitty, said, "Like any community, we have our issues and problems, especially in the area where I'm from.

"But people will rush around and give you help if you need it. They will still cuss and argue with you, but if you're in a crisis, you'll always find people who are willing to help.

"For example, there are two families who are neighbours close to where I live, but they don't talk to each other. One of their houses caught fire one night, and it was the neighbour who jumped up, got water, called the police, and helped out. After everything was finished, they still don't talk; but she helped.

Brown added: "If you listen to the bus drivers talking to each other, they are loud and shouting and sound like they are so upset.

"But once you talk with them you realise, 'oh please, it's just him!' I suppose we can be viewed as a moody bunch on the surface, but we're mushy on the inside," she said while laughing.