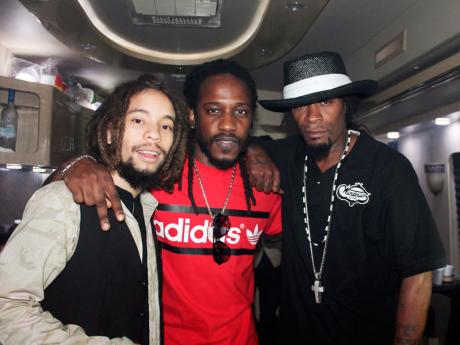 While Maxi Priest will be releasing his 13th studio album on June 10, the young 'Jo Mersa' Marley is gearing up to release his EP, Comfortable.

The artiste is the grandson of the late Robert Nesta Marley and the son of Grammy-winning singer Stephen Marley.

With such a rich musical background, the young Marley recently told United States media that even as a toddler, he knew music was what he wanted to do.

In an interview with Wisconsin's The Daily Page, Marley said that as a child he would mimic his father's verses.

"All the Marley children would come up onstage. The music was talking to us, calling to us. There was nothing else we could do," he said.

The track, released by Ghetto Youths International, is the first track from his EP and is available for listening via SoundCloud.

The song was uploaded to YouTube on May 15 by Ghetto Youths International and has already got more than 12,000 views.

Though his music is influenced by reggae, Jo Mersa also incorporates different genres in the hopes of creating his own style. He has become known for mixing reggae with pop, dancehall and hip hop.

In 2010, Jo Mersa released his first single, My Girl, which saw him collaborating with his cousin, Daniel 'Bambaata' Marley.

Jo Mersa is on tour with his father and Wayne Marshall as part of the promotion for the elder Marley's Revelation Part 2: The Fruit of Life album.