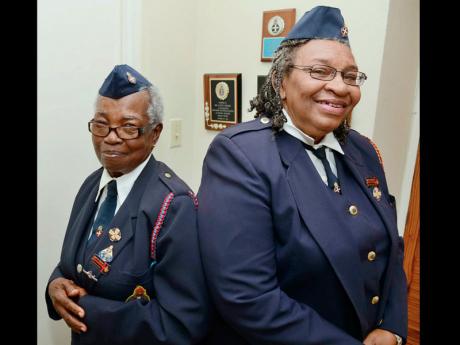 With more than 90 years of service to the young girls of the country, the Girls' Brigade has played an integral role in the development of some of the country's strongest women, and, even more important, the growth of the nation.

The Girls' Brigade is a uniformed, Christian, international, voluntary, inter-denominational organisation that seeks to foster and develop high moral values in young girls between the ages of five and 19.

There is also a leadership programme for girls over 19 years of age.

On an annual basis, it assists more than 2,000 girls in developing good moral values and life skills.

Sitting upright, clad in their navy blue uniforms covered with badges to signify the years of work they have contributed to the organisation and country, Juanita Bernard and Verna Wright shared their experiences with The Gleaner.

Bernard has been part of the organisation for the past 68 years and has previously awarded the Badge of Honour for Long and Faithful Service, while Wright has given 36 years of service and has received the Prime Minister's Medal of Appreciation for Service to Education.

"We are convinced that this is one of the key factors that will rescue Jamaica. If we are not careful, then I'm not sure what we will become. Do you see what is happening? There are even children killing children," she added.

Wright noted that she sees the Girls' Brigade playing more important roles in the community and the Church in the future.

"We are aware of the fact that parenting skills are less and less evident in the family, so they are dependent on organisations like the Girls' Brigade to help to instill values in the children. Children are parenting children and they don't have skills. How will this work?" she asked.

"We will continue to play an important role in nation building. Even the minister of education has highlighted that uniformed organisations on a whole can play an important part in instilling discipline in our young people," Wright continued.

She, however, alluded to the financial problems that the organisation faces as it has not received funding from the Government for the past two years.

"We are realising that we have to go back to core values if Jamaica is to be rescued. To see what is happening, we are concerned and determined as an organisation to find the money and stay alive," Wright said.

"The lack of funding is really posing a problem. Even now, we are hoping to send two young leaders to the international conference in Australia in July. This is important as it will have an impact on the decision-making that will affect the organisation in the next four years," she continued.

The organisation's latest fundraiser event will be its run/walk on June 7 as it seeks to send these leaders to the conference.