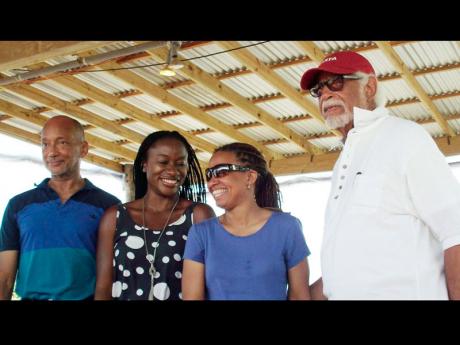 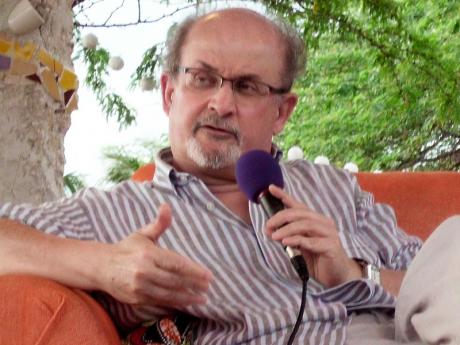 Sir Salman Rushdie responds to a question from American interviewer, curator and writer Paul Holdengräber during Calabash 2014 at Jake's in Treasure Beach, St Elizabeth, on Sunday.
1
2

"I love Calabash," said Douglas Orane. Speaking to The Gleaner on Sunday, the final day of the three-day Calabash International Literary Festival now held biennially in Treasure Beach, St Elizabeth, the former CEO and chairman of GraceKennedy was echoing the sentiments of hundreds, perhaps thousands, of Jamaicans.

It is now one of the "central activities" in his life, Orane said, explaining that he uses the festival weekends as opportunities for reunions of family and friends, many from abroad. "Many friends who came (at his invitation) have been returning," he added.

Orane had another special reason to attend Calabash 2014. He was one of four readers of this year's Tribute novel, Heartland, by Guyana's most celebrated novelist, Sir Wilson Harris.

At every Calabash festival, a Caribbean novel is selected for an extended reading by a panel, and this year marks the 50th anniversary of Heartland's publication. The other readers were Carleene Samuels, Dionne Jackson Miller and Winston Stona.

Harris' son, University of the West Indies Vice-Chancellor E. Nigel Harris, told The Gleaner that he enjoyed the reading, which "captured the dichotomy of the novel". He also mentioned that his father, 93, would be receiving an Anisfield-Wolf Book Award later this year in Cleveland, Ohio.

An online search revealed that the award, which honours literature that explores and confronts issues of racism and diversity, was established in 1935 by Cleveland poet and philanthropist Edith Anisfield-Wolf. It is among the most prestigious in the literary world and another Caribbean novelist, Barbadian George Lamming, will also receive the award in September.

This 12th Calabash festival attracted one of the largest crowds in its history, perhaps because there were so many distinguished invitees.

Heading the list was the Indian novelist Sir Salman Rushdie, author of numerous books, including the controversial Midnight's Children (1981), which won the Booker Prize, and The Satanic Verses (1988), which provoked controversy in many Muslim countries and resulted in death threats being made against him.

A fatwah (death sentence) was issued in 1989 by Iran's supreme leader and Rushdie was forced into hiding for many years. A highlight of the festival was an insightful, laughter-filled interview with the author by American interviewer, curator and writer, Paul Holdengräber.

Other internationally known novelists who made strong impressions on the audience, which overflowed the white tent set-up just metres from the sea, were Zadie Smith and Jamaica Kincaid. They are singled out here because of their Caribbean connections: Smith's mother came from St Elizabeth, and Kincaid is from Antigua.

During her interview by Kwame Dawes (a Calabash co-founder, along with Jamaican novelist Colin Channer and the Jamaica-based organiser, Justine Henzell), Kincaid stated to enthusiastic applause: "I have never seen so many black people at a literary event. Black people don't only read, they write."

Kincaid would have known, however, that many flocking to the festival were not only there for the literature. They also came for the plentiful music, which was both live and recorded.

Starting on Friday evening at 7 p.m., the festival ended on Sunday afternoon at 5 o'clock with music by, as usual, the Calabash Acoustic Ensemble. The Wayne Armond-led band dedicated its session this year to songbird Judy Mowatt.

In his introduction of the musicians, Dawes reminded the audience that a great Jamaican musician is always honoured by Calabash, but Mowatt was the first woman to be selected. He confessed he has been a fan of hers for at least 30 years, ever since he saw her jogging.

For the first hour or so, Mowatt's songs were sung by two women who have accompanied her at concerts, Sharon Tucker and Dawn Martin. Among their songs were Silent River, I'm Alone, Move the Shackles of Your Mind, O Jah and Many Are Called.

Then, to tremendous applause, Mowatt herself took the stage. "This is wonderful," she declared.

Thanking her listeners over the years, she said, "I couldn't have made my journey without you." And she went on to remind those who had forgotten that she always sang "conscious music, music of truth and rights".

From the start of that song, Black Woman, until she finished her set several songs later, she had the audience singing and dancing along. It was a joy-filled ending to what, judging from the general comments, may have been the best Calabash ever.