Saved by the blood: Young mother converted to crusader after donation saved her life 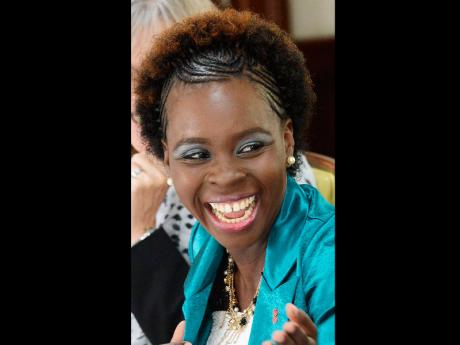 Sydonie Outar had just given birth to her first child when a rare medical condition launched a deadly attack that threatened to rob the baby of her mother.

Outar was never inclined to give blood before she was caught in the throes of death … until her life was literally saved by the blood.

It was after a miraculous recovery that Outar's eyes were opened to the virtues of giving blood.

The diminutive young woman told a Gleaner Editors' Forum yesterday that after her near-death trauma, she found a new lease on life that propelled her to become a crusader for voluntary blood donation.

Soon after giving birth to her daughter, Riley-Rae, doctors at the University Hospital of the West Indies found that Outar, 30, was afflicted with thrombotic thrombo-cytopenic purpura.

There is no simpler name for the rare condition, but one thing was certain: The doctors at Outar's bedside were in need of copious quantities of blood to save the young mother's life.

"When I got pregnant, all was fine, but after giving birth, I developed a rare condition and that (a blood transfusion) was what they had to do to save my life," said an obviously grateful Outar.

The soft-spoken young woman asserted that she became acutely aware that she would not have been around today to enjoy her only child, now four months old, had it not been for the availability of blood, which remains a somewhat scarce, yet vital, commodity at the Blood Bank.

The eye-opening experience has completely changed her attitude towards donating blood.

"When you talked about giving blood, I used to say, 'Oh, not so sure', but when it came to getting the blood to save my life, I said, 'Oh, yes! Sure!" she chuckled.

But while a healthy Outar can laugh these days and share the story of her miraculous recovery, it was not so in February when her world seemed to spin out of control.

At age 30, Outar was pregnant with the anticipation of participating in the miracle of giving life. After waiting for nine months, her expectations swelled on February 19 when it was time for her to give birth to Riley-Rae.

Outar would face the anticipated labour pains with grit that would give way to joy as Riley-Rae came into the world. In the midst of joy, life-threatening tragedy intruded and 'Baby Riley-Rae' nearly lost her mom.

Now, Outar is on a crusade to highlight the miraculous and life-saving benefits of donating blood.

"Once I am through nursing my baby, I will definitely be one of those donors at least twice yearly," she promised.

"I want to go and donate now because of what I have seen about how significant it is," she added.

Outar told The Gleaner that she was maintaining constant medical reviews by going to the doctor every three months.

"I am healthy now and my baby is healthy as well," she declared.