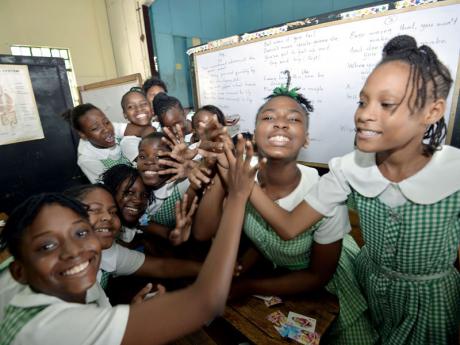 Grade Six Achievement Test students at St George's Girl's Primary and Infant School in Kingston having fun at the school yesterday as they prepared to receive their exam results today. - Norman Grindley/Chief Photographer

As some 39,438 students yesterday prepared to line up this morning to hear which secondary schools they will be attending come September, parents and educators attempted to soothe the nerves of their children ahead of the 2014 Grade Six Achievement Test (GSAT) results.

Although Education Minister Ronald Thwaites has said some 73 per cent of those who sat the exam have been placed in schools of their choice, principal of Naggo Head Primary School in St Catherine, Floretta Plummer, said it was still important for them to talk to the 400 students about accepting the results.

"I spoke to them this morning, and a part of what I said to them was to bloom where they are planted. That is to say that they may not get into one of their schools of choice, but wherever they go, ensure that when they go there, they do well," Plummer told The Gleaner yesterday.

She said she made a decided effort to speak to the children about changing their negative attitude about attending new schools, such as Cedar Grove Academy in Portmore.

At the McIntosh Memorial Primary School in Manchester, the grade-six students were said to be in high spirits and unperturbed by their pending results.

Sharon Anderson, principal at the institution, said the close to 180 grade-six students were fully immersed in their career-day exposition, which is part of the holistic programme developed by the school to prepare the students for high school.

"The programme is very detailed and involves everything from writing with pens, students and the law, preparing them for having many classes with different teachers and even have banks coming to help parents set up savings accounts for the students' education," Anderson said.

She said the students have been effectively advised on how best to handle the results and as a result, they were heading into today confident and open-minded.

One parent of a Kensington Primary School GSAT student, Lorna Barrett, said she was upbeat and had high expectations for today's results.

Barrett said she has had several conversations with her daughter about accepting the results grounded in the philosophy that "you can't sew corn and expect peas".

She said parents should take the results as an opportunity to teach their children that they normally get what they work for.

"I told my child that the results cannot reflect anything but the work you put in. So if you work hard, the results will show and though I expect her to get into one of her choices, it really does not matter because I will be there to support her regardless," Barrett added.