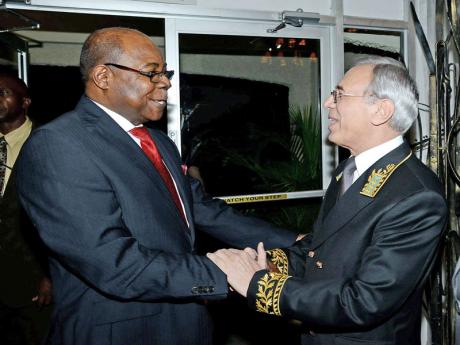 Edmund Bartlett (left) greets the ambassador of the Russian Federation, Vladimir Polenov, at the 24th anniversary of Russia Day. 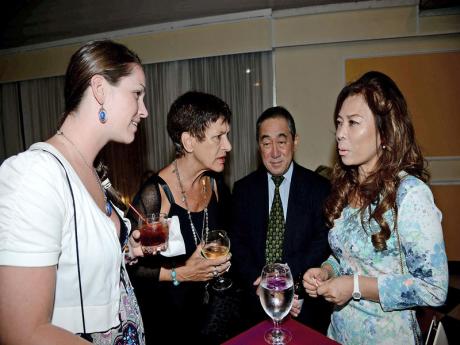 The wife of the Japanese ambassador Sayoko Takase (right) has the full attention of from left: Kairi and Gudrun Beck and her husband, Yasuo. 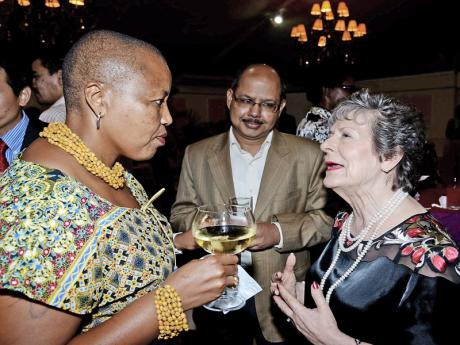 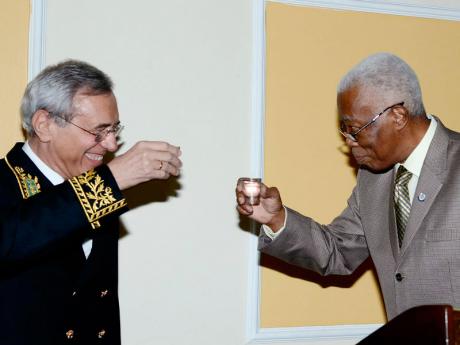 Following the celebrations of the first match in the 2014 FIFA World Cup between Brazil and Croatia on June 12, that night was time for the Russians to celebrate. But they were not celebrating sports, they were celebrating their National Day at the Venetian Suite of the Terra Nova All Suite Hotel.

Introductions and national anthems aside, the Russian ambassador took to the stage to welcome all in attendance, emphasising that it was his sincere honour to see everyone. He explained that the beginning of the Russian Federation symbolised national unity, freedom and common responsibility. He had eveyone's undivided attention as he spoke of his country's strong tradition, promoting a unified positive agenda through collective work and exchange. He also mentioned the strong ties between Jamaica and Russia and their long-standing bilateral affairs, applauding the cultural exchanges.

Minister of Foreign Affairs and Foreign Trade A. J Nicholson congratulated the federation on their 24th anniversary, wishing them continued progress and prosperity.

In honour of Russia Day, each took a shot after which guests were invited to indulge in the savoury indulgences available. There was a buffet selection of fish fingers, callaloo quiche, mini meatballs in spicy barbecue sauce, stuffed chicken wings, fruits, desserts, and wines all around.