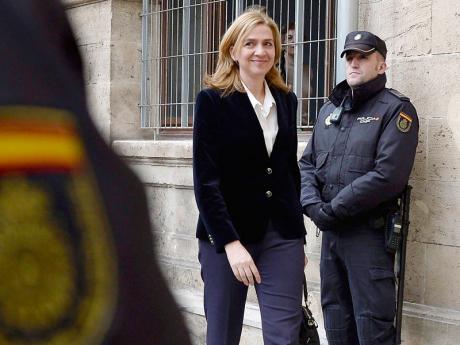 Spain's Princess Cristina arrives at the courthouse in Palma de Mallorca, Spain, earlier this year, after being named as a fraud and money-laundering suspect.

A Spanish judge moved closer yesterday to indicting Princess Cristina, the sister of newly proclaimed King Felipe VI, in a corruption and embezzlement investigation centring on her husband.

Wrapping up a four-year pretrial investigation, Palma de Mallorca investigative magistrate Jose Castro kept her on a list of suspects he thinks should stand trial.

He said Cristina is suspected of two counts of cooperation in tax fraud and one of money laundering. The judge said her husband, Inaki Urdangarin, is accused of embezzlement and fraud. Neither has been formally charged.

Prosecutors and defendants will study the ruling and present their accusations or arguments. The judge will then decide what indictments to issue, a step not likely to occur before September.

The state prosecutor has long opposed having Cristina as a suspect and has said he will appeal Castro's ruling.

The case centres on allegations that Urdangarin used his Duke of Palma title to embezzle some €6 million (US$8 million) in public contracts through the Noos Institute, a non-profit foundation he and a business partner set up that channelled money to other businesses, including Aizoon, a company he owned with Cristina.