Paulwell: Restart bauxite operations or else 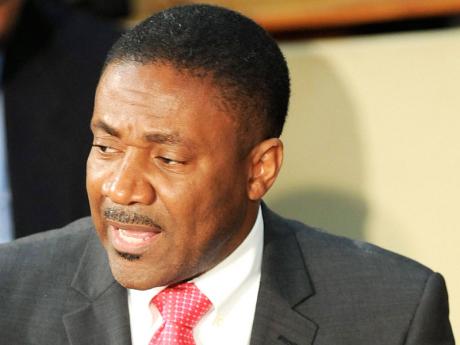 RUSSIAN-OWNED UC Rusal has until New Year's Day 2015 to restart operations at its Alpart and Kirkvine refineries or lose the rights to mine bauxite at the two facilities.

Mining Minister Phillip Paulwell, in closing the Sectoral Debate in the House of Representatives yesterday, said he wrote to UC Rusal last Tuesday, informing the company, "It is my intention to revoke the special mining leases (SMLs) in respect of the Alpart and Kirkvine refineries in the event that bona fide mining operations do not commence within six months."

The minister had issued at least two previous threats to UC Rusal about the revocation of its licences. Paulwell had previously used the floor of Parliament to indicate his desire to strip Rusal of its licence if it failed to restart mining operations at Alpart and Kirkvine.

From as far back as last year, Paulwell has been threatening UC Rusal that it would lose its licence if it failed to resume mining operations.

"They know that their licences will not be tenable unless we finalise a day for reopening so all parties are aware that this is a fundamental issue that has to be settled," Paulwell said last month.

At that time, he said officials of UC Rusal and the Government were set to have meetings in June to discuss, among other things, the reopening of the plants, which have been closed since 2009.

Yesterday, Paulwell said the bauxite reserves associated with both plants represent more than 200 million tonnes of ore "idling in the ground while the plants flounder in uncertainty, and the livelihood of thousands continue to be in peril".

"This situation cannot be allowed to continue indefinitely," the said.

In seeking to justify his actions, Paulwell said the ban in Indonesia has created a shortage of supply on the world market and has made Jamaica a more attractive prospect internationally. He also said there was an emerging delinking of the price between bauxite and aluminium.

"This emerging delinking would mean a reassessment of our policy as it relates to the bauxite industry. The increase in the price of bauxite has created greater value in our existing bauxite reserves," Paulwell said.

He added: "We, therefore, have to be strategic with how we treat with those reserves going forward … . There are many credible queries about our reserves, and we now have to make hard-nose business decisions in the best interest of the country.

"In that regard, we will not allow any company to hold us at ransom and deny potential investors the opportunity to invest, generate employment, and enable the industry to play its proper role in growing the Jamaican economy," the minister said.

He also told Parliament that the ministry would, later this year, lead a national conversation about the future of bauxite. The discussions, he said, would provide an opportunity for all stakeholders in the sector to bring their information, experience, and perspective to the fore as the country seeks to move the sector forward.