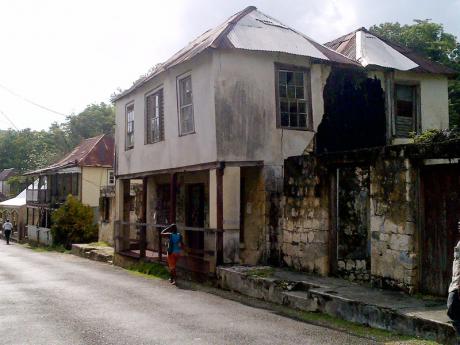 Old buildings along a section of the main road leading to the Stewart Town square in Trelawny.

If you enter Stewart Town, located in the Dry Harbour Mountains of Trelawny, from the eastern end, you might get the feeling that you have traversed into an era that has long gone, perhaps a hundred years ago. The ancient, derelict, and dilapidated buildings, and the ruins that make up the architectural landscape of this once-bustling town have frozen it in a time warp.

It has been 202 years since the idea of setting up this crossroads township was conceived. It was 1812 when war broke out between Britain and its North American colonies, and supplies to Jamaica were scarce. By royal assent of King George III of England, Law 53 Chapter 19 was passed authorising magistrates and members of the vestry (commissioners) to set up a town on 50 acres of land. Coffee cultivation was to be the main commercial activity.

Bye-laws and ordinances governing the running of the town were also to be passed. In April 1815, the commissioners met to start the process of establishing the town, and in a meeting held on August 20, 1815, the town was incorporated, becoming the second such incorporated town in Trelawny, Falmouth being the first. It was named Stewart Town after the custos of the parish, James Stewart,

It wasn't set up as a free village itself, by any means, but it was to eventually become a place where free villagers from Trelawny and St Ann travelled to do business. Its development was led by Stewart, and for decades, the mountain-top town thrived, becoming a commercial hub where people from other villages, estates, plantations would go to get supplies and sell their produce. It became a popular market for free villagers, after 1838, Emancipation year.

However, with the rapid decline of the plantation system in the 1880s, and the rise of Falmouth as an important shipping port, Stewart Town was beginning to lose some of its allure. Brown's Town, in neighbouring St Ann, was also becoming more of a market destination than Stewart Town. The arrival of John Stockhousen in the late 1880s in Stewart Town, from Ulster Spring, injected some life into the declining village.

John Stockhausen, of German descent, was to become an influential farmer, property, land, and business owner. Married to Miriam with seven children, the justice of the peace was also a lay preacher in the Methodist Church, and a lay reader in St Thomas Anglican Church. He was manager for the first People's Co-operative Bank, opened in Stewart Town in 1913. He also once owned the post office at Stewart Town, and its adjoining land. His wealth and influence extended outside of Stewart Town, for instance, as in 1903, he owned the post office in Jackson, (Jackson Town, Trelawny) and the store and land behind it. Stockhausen died 1939 at 77.

Another prominent persona in the story of Stewart Town is Reverend William Menzie Webb, born 1839, the son of an overseer, in Southampton, Brown's Town. He was a member/chairman of the Parochial Board of Trelawny, and in 1901, he was elected a member of the Legislative Council. He was said to be responsible for the transferring of the rights of the Falmouth Water Company to the Parochial Board in 1902, and the first dredging of the Falmouth Harbour.

Webb died in July 1912, aged 73. He founded The Webb Memorial Baptist Church in Stewart Town, and is regarded as the founder of Westwood High School, which evolved out of prejudice, after a school operated by the Knibb sisters was forced to close its doors. This happened after some parents withdrew their children because two dark-skinned girls, daughters of a Baptist and a Presbyterian ministers were admitted by the sisters.

But with the assistance of a Mrs Trestrail, wife of a Dr Frederick Trestrail of Bristol, England, a former secretary of the Baptist Missionary Society, and a Reverend Henderson, a Baptist minister of Brown's Town, Webb, opened The Manchester Girls' School at Manchester Pen in 1880, with one teacher and six pupils. That was the first name given to the Westwood High School.

Perched high on a hill, Westwood has been waving the flag of academic excellence since 1880, but Stewart Town, established 65 years before Westwood, has been in a state of social, infrastructural and economic stagnation for decades.

Producing one of the first policewomen in Jamaica, Iris Tulloch, it has long lost its prominence to Brown's Town. On a recent visit by a Gleaner news team, an elderly resident, Henry Hall, demanded that the story be called 'Ghost Town'. After nightfall, it seems, nobody can be found in the square, except ghosts, and the offspring of a generous dog called 'Valentine'.

From the main road to the interior of the community, all the buildings and ruins, except for a few, are screaming old, old, old. The public cemetery doubles as a football field. It is a place where the youths play while their ancestors watch from their eternal homes, perhaps.

And in this aged place, there is a dwindling population of people with modern-day needs, sensibilities and tastes that nobody in central and local government seems to care about, according to some residents. Community activist, Sharon Bailey, who said Stewart Town is a "retirement spot", is also of the view that "we are behind donkey's or cow's tail".