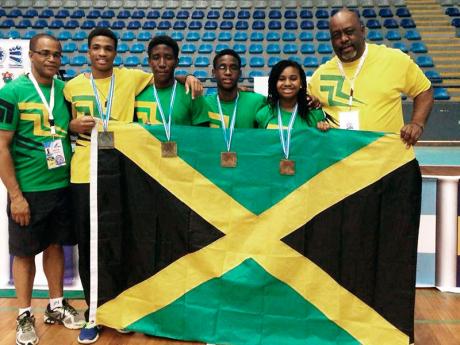 Jamaica won three medals - gold, silver and bronze - at the Pan American Junior Badminton Championships, which ended in Guatemala at the weekend.

Samuel Ricketts and Sean Wilson defeated the American pair of Timothy Lam and Justin Ma 21-16, 21-15 to take gold in the under-19 boys event.

Earlier, the under-17 pair of Alana Bailey and Shane Wilson won the bronze medal in the under-17 mixed doubles.

Fifth seed Ricketts gave a good display in the under-19 singles final, but was worn down by the class of Lam. The first set saw Samuel playing point for point against the more consistent Lam. Lam had Ricketts beaten with several cross-court smashes, but the Jamaican countered with his own style and fitness to push the American to the limit in the first set, which he lost 22-20.

The second set saw a close battle early, but Lam continued to employ the same down the line and cross-court smashes, and this took a toll on Ricketts.

Sean Wilson, who looks destined for greatness, with his cool and controlled temperament, came out with Ricketts in the doubles, with revenge on their minds.

The Americans Lam and Ma were never given a chance to settle, and the Jamaican pair dominated the match, winning and taking the country's only gold medal at the championships in straight sets.

Ricketts and Wilson, along with the rest of the Jamaican team, will now turn their attention to the Sports Development Foundation/National Commercial Bank Caribbean Badminton Championships that will be held at the Alfred Sangster Auditorium from August 7-15.