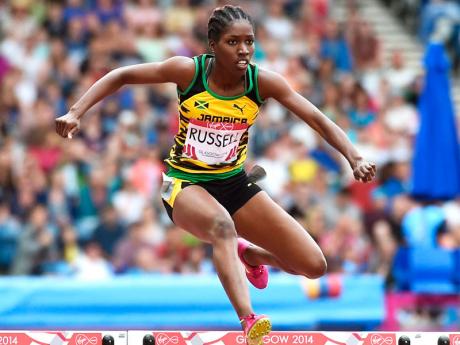 A dominant figure as a schoolgirl at Holmwood Technical, Jamaica's 400-metre hurdler, Janieve Russell, is determined to make her mark at the senior level.

She is well on her way to doing so, after advancing to tomorrow's final at the Commonwealth Games in Glasgow.

"That was my plan, to try and get in the final," Russell admitted. "I will talk with my coach now and we will see where I need to improve ahead of the final."

The 20-year-old will line up beside fellow Jamaican and training partner at MVP Track Club, Kaliese Spencer, who also won her heat yesterday in 55.45 seconds.

"It's great working with her at training, she always motivates me and my coach is always there, motivating me and talking me through the race," Russell said. "It's great training with her, she's is like my mentor."

Russell, who also won gold at the IAAF World Junior Championships in Barcelona in 2012, is excited to have graduated to the senior ranks.

After winning close to 30 Champs medals in her four events as a schoolgirl, Russell says it was important that she proved to herself and the world that she can make the transition and not fall by the wayside, like many school stars before her.

"It's always been in the back of my mind that I don't want to be a former top athlete at the high-school level and then I cannot be found at the senior level. I want to make a great transition into the senior level and show that athletes who do well in high school can still come out at the senior level and do the same," said Russell, who admitted to being so anxious before her senior debut that she had difficulties sleeping the night before.

"Honestly, last night (Monday) I was trying to ensure I got enough rest, I was a little bit too excited though, so last night, I didn't get much rest, I couldn't sleep so I was really worried about today because my body wasn't well rested," added the Paul Francis-conditioned athlete.

"It's been a really good experience. Yes, it's my first senior team run and I am delighted to be out there representing my country at this level," Russell beamed. "I got a little bit of it right, there's room for a lot more improvements, and I hope I can get it right in the final."