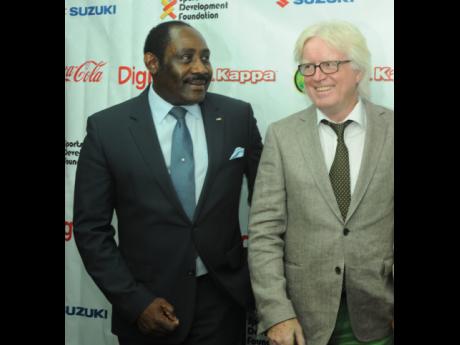 Donner und blitzen! Achtung! That's the extent of the German that I know, but I now understand why rubella is called German measles because when something gets under Winfried Schaefer's skin, he gets very rash. In doing so, he may have given the Jamaica Football Federation (JFF) a lifeline as the organisation might now have a solid basis for telling him auf wiedersehen and not have to pay him for the outstanding period of his contract.

Now, given the unexplained termination of the workers at Caymanas Track Limited, the suspected leaky reason for the dismissal of the CEO at the National Irrigation Commission, and the exit passport of the head of the Passport, Immigration and Citizenship Agency (PICA), there is lots of firing in the air.

Sacking a worker for any reason is not something that should be done frivolously. Indeed, I have spent the better part of my life fighting for and even cussing out derelict trade unionists for not effectively representing the workers against unscrupulous employers.

Moreover, Government has only scratched the surface of the current labour laws in recent years, making it very easy for workers to be disenfranchised. True, with the 2010 amendment of the Labour Relations and Industrial Disputes Act (LRIDA), the individual non-unionised worker has recourse to the Industrial Disputes Tribunal (IDT). It is the only institution that can reinstate an unjustifiably dismissed worker.

It is old law. More than a century of jurisprudence has made it clear, either in statute or the common law, that a worker's job is property, like real estate or a car, in which he has accumulated equity. As such, it cannot be flippantly removed from him without due compensation, especially when he has worked for years in building up the business of his employer.

Furthermore, there are contracts that have the expectancy of earning over a limited period. In such contracts, there is often an explicit notice clause, as well as another, which triggers compensation for the incomplete number of years left on the contract.

Perhaps the uninitiated in labour law might not notice, but Section 5 (5) (b) of the Employment Termination and Redundancy Payment Act (ETRPA) defines a dismissal to include where "under that contract he is employed for a fixed term and that term expires without being renewed under the same contract". In other words, even if he works to the end of his contract in 2018, and the JFF refuses to renew, he is still considered dismissed. However, there is no basis for redundancy payment.

From all appearances, Schaefer might have an iron-clad provision in his contract that will force the JFF to pay over a king's ransom if it is terminated prematurely. Still, implied in every contract is some notion of performance at an expected level. Nonetheless, given that the 'ball round', only a fool would sign a contract that is tied to a guarantee of good performance, especially when it is not linked to the direct 'capacity' of the contractee. Schaefer has no more control over the performance of the 22 men running up and down chasing after big balls than Stephen Francis has over his former charge, Asafa Powell, performing on the day.

While I agree that good coaches will produce good showings on the field, more often than not, the coach is not donning the spikes or shooting the balls. Yet, we have expected outcomes.

To be fair to him, we had a brilliant showing in the CONCACAF Gold Cup last year, where we drew with Costa Rica; beat Canada, EL Salvador, Haiti and the great USA, before crumbling to Mexico 3-1 in the final. Another brilliant showing was a series of Bob Marley-inspired results of One Love against Uruguay and Paraguay and a clean similar showing against a Messi Argentina in the Copa AmÈrica.

Prior to that, we retook the Digicel Caribbean Cup as Trinidad and Tobago had no service to answer their missed call against us. At the end of that competition, Schaefer was telling the World Cup qualifiers to 'please call me', and, of course, indicating to the detractors to 'please credit me'.

But Digicel and dismal start the same way, and we came up short like a man who feeds on only Cheez Trix as we tumbled out of control in the elimination rounds and suffered the ignominy of Haiti beating us in our own frontyard, kicking in two goals in Kweyol (Creole) while no patois went into theirs.

Did Schaefer have a failing record? That is moot, but what is important is that he failed on the big stage. Like my beloved track and field, winning at Penn Relays, the Diamond Leagues, and World Relays is only gravy. The meat is the Olympics or the IAAF World Championships. Given that his primary task was World Cup qualification, he failed.

Still, can we say that he got the necessary tools and raw materials to work with? What were the terms and conditions under which he had to work? For example, it is well known that he had extended periods when his Ben Johnson day exceeded months. Dumpling and butter might substitute for an avid patriotic footballer who just wants to represent his country, but that can't hold a German. In that regard, one might include in the criticism his employers in the JFF.

While I am not joining the wagon in asking for the boss to go, it is reasonable to ask if the president only half-baked the plans to make it to the 2018 finals. Did the JFF put the rush into Russia?

Nevertheless, for all the foregoing, it is possible that the accumulated misconduct off the field might amount to 'repudiatory conduct', facing off a match official in Nicaragua, and showing 'unsporting behaviour' in 2015. Unplugging a microphone and interfering with the freedom of the press and other constitutional rights are things that he will not see eye-to-eye with me. People in Jamaica have been fired for less than that.