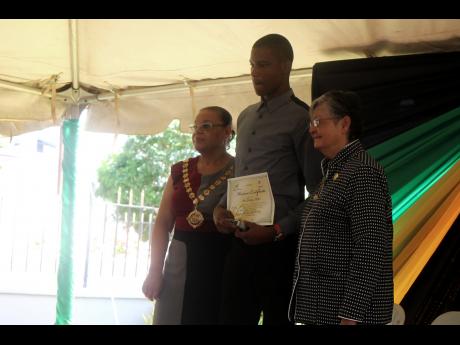 THE JAMAICA Cultural Development Commission, in association with the Manchester Parish Council, on Monday hailed the efforts of those who have worked valiantly and selflessly for the parish and its people.

Fifteen justices of the peace were honoured for exceptional service during the protest staged by members of the Jamaica Constabulary Force earlier this year. The 12 men and three women handled matters at the police stations while the few available police personnel tried to maintain order on the streets.

Twenty-two persons were also recognised as the 2015 parish honourees. It was among these honourees that seven-year-old Gaviana Johnson and 22-year-old Shamoy Nation stood tall for their bravery.

At the tender age of one year and seven months, Gaviana, while at home with her grandfather, acted unexpectedly when she sought to get help for her grandfather who had fallen and hit his head. As he lay unconscious on the ground, Gaviana ran to a next-door neighbour who could barely understand the sentence she was trying to formulate.

The tot soon took the hand of the neighbour and brought her to the area where her grandfather was, and it was there that arrangements were made to have him taken to the hospital.

But unlike Gaviana, who at the time was in no imminent danger, the next honouree risked his life to save another when he entered a house engulfed in flames.

On October 1 of this year, 22-year-old Shamoy Nation had just moved to a new neighbourhood after his previous house was destroyed by fire. At around 9:30 p.m., while home, Nation realised that one of his neighbours' house was on fire. With no knowledge of the person(s) who occupied the house, the young man got dressed and hurriedly ran to their rescue.

"When I got over there, I realised the tenant that lived at the house had jumped from the balcony and was trying to pull the grille to let out the elderly woman who owned the house, but she couldn't," Nation told Rural Xpress.

He quickly took over, made an entry into the house and searched for the woman and found her.

"I wrapped my arms around her and put her arms around me and led her out of this. By this time, the whole house was in flames. I don't know if it's because my own house burnt down and left me with nothing and even now me cyaa build back. I don't know if that is what helped to push me to do this, but I just had to help," he said.

Nation, who now works at a service station in the parish and has his aspirations set on becoming a member of the army, was able to single-handedly rescue his neighbour with not one scar to her body, and with a heart of gratitude.