Bintah the turtle on a edutainment adventure 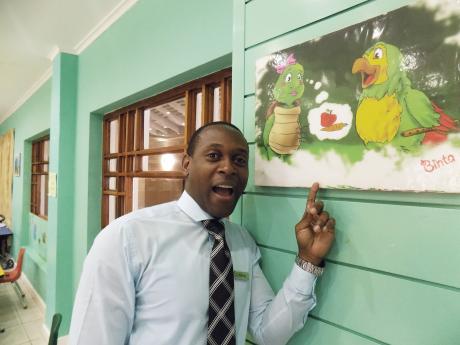 Ihenyen Ejodame is the writer behind the series of children's books that follow a fun-loving and adventurous turtle, Bintah.

Since moving to Jamaica seven years ago, the Africa-born author has written three books in the Bintah series and is looking to add three more. But, he says, he faces a tough challenge as he tries to balance his dream as a writer and his job Ejodame is a night manager at Jewel, Runaway Bay.

"It's been the hardest thing in my life," he told Arts and Education. "It's never been an easy road to follow, but it's kind of like when you tell yourself that you want to be successful, you don't have any excuse to be lazy."

Since the tender age of 15 as a youth in Africa, Ejodame says that he has always dreamt of becoming an author. "My family is Nigerian. My mom is Jamaican. I was born, raised, and schooled in Nigeria. I have been writing books from when I was a kid, but I always write novels.

"I came to Jamaica when my mom said to me,'Why don't you come over and meet my side of the family?' One day, we came to pick up one of my uncles at Jewel Dunn's River and I said I would like to work here."

He joined as a trainee manager at Jewel Dunn's River and was then promoted to Gift Shop manager for the Runaway Bay location, and now he is the night manager there. "It was luck mixed with, I guess, proper timing," Ejodame said.

About his decision to write a children's book, he explained: "One time, a lady came to the house where I live in Brown's Town with her son. He was ten at the time and he didn't know how to read anything, and she used to beat him like 'Go and read your book.' I noticed that he didn't like studying, but he used to create trucks and stuff, so he was very creative. I thought, 'This boy is intelligent. He just doesn't like reading', so there has to be a different way to make him look at a book and say, 'Let me read this book'. He was my inspiration to write the Bintah book because it's more educational but mixed with a little bit of adventure as well."

The three-part series - Meet Bintah, Bintah Takes a Trip, and How Bintah Got Her Jewels - takes readers along a fascinating and colourful storyline as they are engaged with easy-to-follow literacy and numeracy material. Ejodame says the response to the series has been great, especially from his workplace.

General Manager Scott Robbins told Arts and Education: "We are very proud of Ihenyen and his project. We let him sell the books on property in our gift shops. We also have our Manager's Cocktail, where we let him give one of his books away, and he signs as the author and we big him up." He continued: "He had a meeting with the minister of education. We had meetings with him with a charity, Books for Kids, and we're trying to get his books in that charity."

For Ejodame, the most rewarding feat of being a writer comes from having the opportunity to expose his readers to identifying misconceptions about his and other cultures. "People ask me the weirdest questions like 'Do you guys have clothes?' 'Do you guys have lions walking around?' Because people don't know Africa, that made me write a book about my characters going to Africa, going to a couple of countries just to kind of educate young people kids about Africa."

He revealed: "Bintah is in a lot of schools. Principals have called me personally to tell me they like the book and they want me to come to their schools, read to the kids, and bring the mascot. A lot of people have said they like the writing."

Each Bintah book consists of a workbook, a reader book, and a poster. According to Ejodame, three more books in the series will be released by the end of this year and the Bintah animation is in the works. The books are available islandwide in all major book stores.