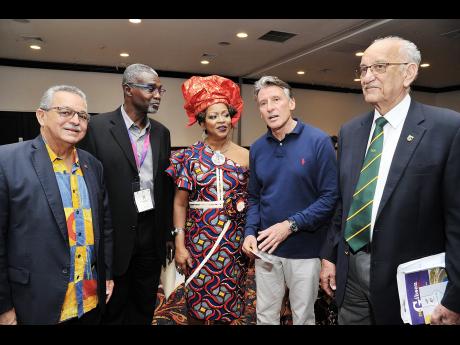 A full-length history of the Gibson Relays titled The Gibson Relays: History & Impact on Jamaica's Sports Culture and Social Development, which was commissioned by the Gibson-McCook Relays Organising Committee and covers 41 years of the event's history up to 2014, was recently launched at The Jamaica Pegasus hotel.

Among those present at the launch were Lord Sebastian Coe, president of the IAAF, and Dr Victor LÛpez, president of NACAC, both of whom were presented with copies of the book.

Gibson-McCook Relays Organising Committee Chairman Professor Rainford Wilks expressed satisfaction at the end result of the committee's decision to record for posterity the achievements of the Relays, and in particular, the mandate given to the writers for the Gibson Relays history to be placed in the context of the overall development of Jamaica's sports culture and social development.

Wilks paid tribute to the author, Professor Verene Shepherd, both for the rigour and depth of the research conducted by her colleagues at the Institute of Gender and Development Studies of The University of the West Indies, and for her role as author in creating a high-quality work of historical integrity. Publisher Ian Randle also came in for special mention as a crucial member of the team that led to the execution of the final product.

Shepherd, who is professor of social history at the University of the West Indies, said that the book was intended to ensure that the history of an important event and those who contributed to making it sustainable was documented.

"Memory, memorialisation, and iconic recognition," she said, "were all important, and observed that Jamaica had now developed such a culture."

While acknowledging the contribution of other writers and publications on sports and sporting personalities in Jamaica, Shepherd said that this was the first full-length book that incorporated a gender perspective by delving deeply into the discriminatory aspects of sports in Jamaica. She expressed the hope that the book would help to wake up Jamaica and spur the country into fully developing its vast sports and cultural heritage into economic development.

In his feature address, President of the Jamaica Olympic Association Mike Fennell congratulated the Gibson-McCook Relays Organising Committee in commissioning and following through publishing this important history.

He paid special tribute to the late Teddy McCook, one of the founders of the Relays that now bear his name, and ascribed much of the success and longevity of the Relays to the principles that McCook insisted should always guide the event, including consistency, strict adherence to rules once established, impartiality, and equality among companies large and small in the method used to allocate sponsorship of events.

The Gibson Relays: History & Impact on Jamaica's Sports Culture and Social Development has over 200 pages of text, with statistics, rare archival photographs dating back to the inaugural relays, as well as photographs from more recent editions and memorabilia.