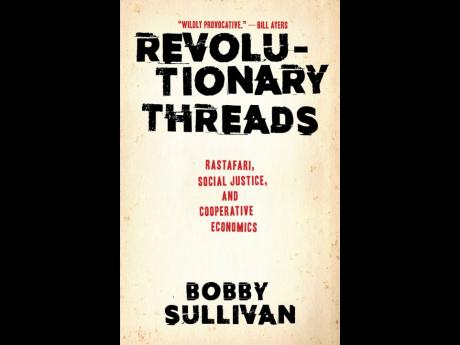 The last lines in the foreword of Bobby Sullivan’s Revolutionary Threads read, “With cooperative economics, together we can build an inclusive future truly worth living.” In the same afterword, he admits that he has woven together “a proverbial quilt of icons, as the way forward is about inclusion… the principle of unity, without uniformity.”

Outlining his philosophical influences and backpacking through history and criss-crossing continental borders, Sullivan puts his enlightenment journey and way of life, which includes activism for social justice, prison outreach, and cooperative economics, on paper.

In doing this, Sullivan weaves his story of revolution as he tells stories of revolutions that pre-date and influenced his.

Mainly Rastafarian in outlook and ‘livity’, the author, who grew up in Washington DC during the punk rock era (circa 1970s -1980s), also chronicles the Black Power Movement in the '60s and '70s in the US, which drew inspiration from the New African Liberation Movement happening in Africa and which spread to the US and the Caribbean.

His retelling of the activities and clashes with the establishment that the Black Panther Party, the Black Liberation Army (BLA), the Revolutionary Armed Taskforce (RATF), and the MOVE Organization had in the decades that preceded his coming of age, gives the reader an insight into his other major influences outside of Rastsafari.

Sullivan identifies similarities between the MOVE Organization and Rastafarianism, noting that the former “is like a home-grown version of Rastafari”, with many points in their ideologies converging – with one being the idea of self-sufficiency.

The MOVE, Sullivan explains, affirmed that their religion is life; that they believe in natural law and self-defence. They see revolution as starting with the individual … with a personal commitment to do what is right.

This definition of revolution and revolutionary is what we see depicted and illustrated throughout Revolutionary Threads, which we can refer to as Sullivan’s enlightenment memoir. As the author shares his journey, belief, and practice of co-opts, we see, indeed, that this life-path is not about worshipping money and making it solely for profits. We see that Sullivan’s idea and practice of revolution is not conflict and war, but doing what is right, and what is right, as he sees it, includes helping others to self-achieve and be self-sufficient. It includes going to the prisons religiously and ministering to the inmates. It includes sharing his knowledge of co-opts and best practices to those seeking economic independence, whether they are prison inmates, burgeoning co-ops in Jamaica or Cuba, for example.

With some chapters being introduced by quotes, songs, and poems, penned by him and others, the book is one for the artistically inclined, the academic, the economist and entrepreneur as it engages all these. It is a left- AND right-brain book, reflecting the author, who has been in more than one musical band, notably the punk rock band Soulside.

As Sullivan details how he came to the Rasta ‘way of life’, and his economic outlook, we get a bibliography of sorts of seminal books and papers on history, philosophy, and scientific and other issues with which the world grapples. As said earlier, there is, too, a quilt of icons who influenced the destination and peopled the journey.

In John Brown, white abolitionists who led slave uprisings, Sullivan saw a like mind. Maybe not in the engagement of conflict but in the ability to see those described as ‘others’ as actually kin. Sullivan details how Brown literately fought for the abolition of slavery and invited Harriet Tubman and Frederick Douglas to fight with him. He also shares that Brown was influenced by the Jamaican Maroons and followed their example of using the mountains as a stronghold.

With a father who worked for the CIA and with early influences and influencers, which included healthy doses of reggae and Rasta reggae musicians as a youth in Washington, DC, which he details as a cultural melting pot, and as he describes himself as racially ambiguous, the book’s title also seems a fitting description of the revolutionary threads of the author.

Sullivan establishes early on that civilization began in Africa and uses the Piltdown man hoax, whereby a group of scientists ‘manufactured’ skeletal remains; ’found’ in Piltdown, Sussex, to prove that humanity began in Europe, to illustrate the deceit behind many ‘facts’ we have believed through the centuries, given to us from the days of the Greeks to now. One of these ‘facts’ he also debunks is that of ‘race.’

Quoting authors and seminal pieces on the topic, including an early 20th-century Jamaican-American journalist, J.A. Rodgers, who uses empirical evidence to illustrate that race is a “modern social construct,” and noting that race is a by-product of European colonialism and the institution of slavery, Sullivan cites examples of interracial harmonious existence before modern times even in the US.

The idea of race being a social construct connects closely with Sullivan, who describes himself as racially ambiguous. This is not mainly because he wants to, but as he explains in the book, as a youth he was called white by the black and referred to as not white by the whites due mainly to what he says is a darker pigmentation than his siblings.

Noting that political independence is tethered to economic independence, Sullivan chronicles the attempts of ‘down pressed’ people through the ages from the Maroons, to slaves, to developing countries following WWII to gain both.

He also outlines his view that the world trade and economic system before and following WWII never had development of the then-called Third World, or poorer countries, in mind. He uses Walter Rodney’s reasoning that free trade is a “slick misnomer for a controlled economic environment where powerful governments and corporations create rules to suit their own ends”.

Sullivan also ‘down cries’ the banking system, after detailing how, in his reasoning, false crises were created in the US in the early 20th century under the Federal Reserve Act, forcing citizens to subscribe to the idea and necessity of a central bank and industrial banks in general.

Drawing on the Ethiopian and Rastafarian emphasis on self-reliance and self-sufficiency, coupled with the Rastafarian community’s great appreciation and love for nature, Sullivan underscores how organic farming and co-opts are natural outlets for economic independence.

The co-opts, he explains, in allowing the farmers to collectively agree on the crops they plant, thus ensuring no glut and no severe competition, as each would plant a variety of different crops, thus not duplicating yields, represents an alternative to slavishly following the one-crop hyper-competitive model, which often results in market glut and profit loss for the small farmer.

All these, he says, were traits of Black Wall Street in Tulsa, with replications in Texas, Nashville, and Tennessee in the very early 20th century. This, he explained, happened because in essence, the blacks, as a result of the segregationist mentality at the time, were forced to trade among themselves and thus created centres of commerce, of which the Black Wall Street in Tulsa was the epitome.

Quoting Haille Selassie I, “If the wealth of a person cannot be for general welfare, what would he gain for himself and his offspring but grudge and hatred,” and detailing the emperor’s efforts in establishing co-opts, Sullivan posits that “cooperative economics are a non-confrontational way to wage the kind of revolution everyday people need”.

- Ann-Margaret Lim is an author and a poet, her second collection of poetry, Kingston Buttercup was amongst the Bocas Prize 2017 poetry shortlist. Her books are available at Bookophilia, at Amazon and peepaltreepress.com