Artistic insight into complexities of the mind 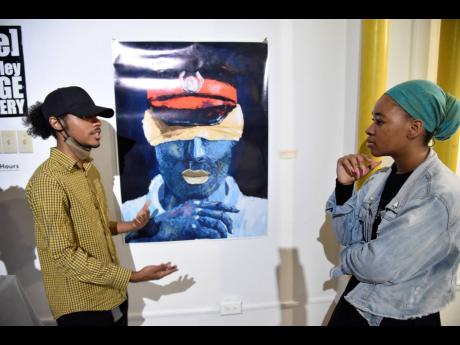 Nicholas Nunes
Andrew Cross (left) speaks about his work ‘Nonchalant’ to Tonycia Jarrett at the ‘State of Mind’ art exhibition held at the CAG[e] gallery. 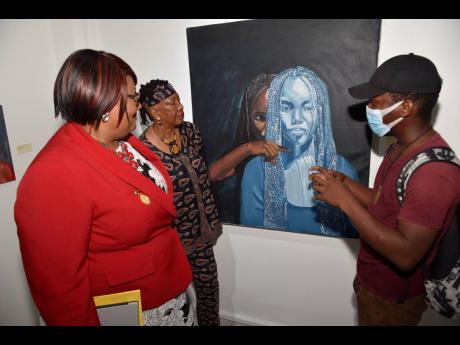 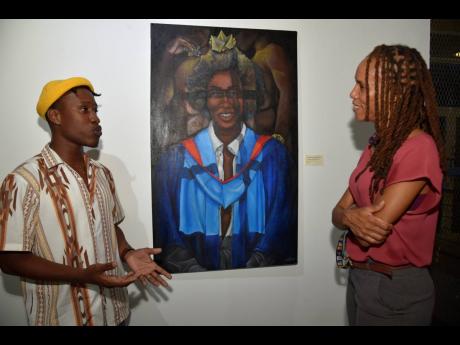 Nicholas Nunes
Jaevon Vassell (left) with his artwork, ‘The Window of Opportunity’, speaks to Kerry-Ann Henry.
1
2
3

Students of the Edna Manley College of the Visual and Performing Arts launched ‘State of Mind’ art exhibition at the CAG[e] gallery on campus.

By having open dialogues of what the concept of the human ‘state of mind’, through art, and what mental health means to them, students in the Introduction to Curatorial Studies course portrayed visual stories and personal experiences of living and coping with mental health difficulties on a routine basis through the visual arts, dance, drama, and music forms of expression.

Tahj Richardson, a second-year visual arts student, explained that his piece – oil on wood construction – forces the audience to follow the artwork and the emotions it exhibits. From left angle, one can see a happy, cheerful female; however, when the viewer moves to the right the subject’s deeper feelings emerge, revealing her to be suffering despair, frustration, and rage as she battles anxiety disorder and depression.

The ‘Minutes Apart, 2022’ piece investigates while also raising awareness of people who suffer from anxiety and depression, and how challenging it can be.

Richardson said that the inspiration for it was a close friend of his who suffers from anxiety disorder.

Anxiety disorders are distinct from normal sensations of uneasiness or anxiety in that they feature an intense, overwhelming, and persistent fear or worry that interferes with an individual’s daily activities.

“State of mind to me means how well you take care of your mind but also your body because your physical health is linked to your mental health,” said Richardson.

He encouraged others to make the extra effort to care for their mental health.

During her keynote address, she stressed the importance of being mentally healthy as the transition into adulthood and the taking up of responsibilities while trying to find meaningful relations weighs heavily on young adults.

“The struggling with trying to find or try to achieve that developmental task sometimes can lead to feelings of loneliness and isolation,” she said.

Life events such as unemployment, bereavement, or traumatic experiences are ways people are more likely to develop depression as well as complex combinations of social, psychological, and biological factors.

“We know that in Jamaica we always find creative ways of dealing with our issues,” said Mullings-Thompson, but despite this, with the impact of the COVID-19 pandemic, many would have found it increasingly difficult to manage their issues.

She, however, lauded the students for their exhibits on how they dealt with mental health issues, noting that art is a vehicle through which people can express feelings and unspoken emotions that they have been struggling with.

“What I see coming out in some of the art displays are some of the repressed or suppressed emotions that we have, or you have, that have been dormant and need to be addressed,” she said.

Speaking with The Gleaner, Jaevon Vassell, whose work ‘The Window of Opportunity, 2022’ defined the concept of ‘state of mind’ as how an individual relates to the things around them, especially in cases where that individual has had traumatic experiences that have left a psychological scarring.

His work delved into the harsh reality, which he attested to witnessing, of young women in college funding their studies by selling sexual favours, Vassell opted to explore the mental agony and sadness that arises from such a path taken in efforts of seeking a better life.

“For me as an artist ... in order to push great-quality work ... it’s a priority fi have a great state of mind ... because it already pressuring fi deh here in terms of finances and things like that, so you have to find a proper way fi balance it off so you can maintain a sane mind so you nuh go mad,” he explained.

“Me like touch pon topics weh most Jamaicans nah go touch on, especially topics weh need fi talk bout fi make a change like that,” he continued, adding that while many would refuse to discuss such topics due to fear of censorship, he, as a controversial artist, believes that “if it’s not talked about then it’s not relevant”.