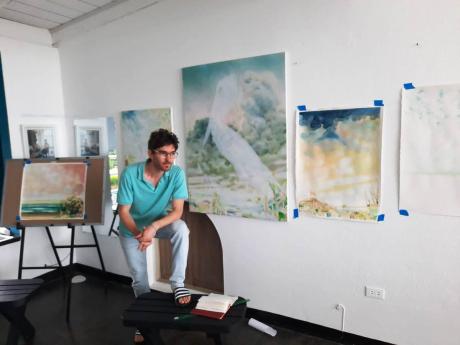 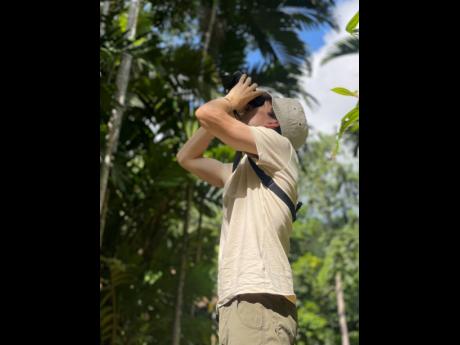 American painter Spencer Reinhard is loving the new art he is diligently producing. Currently an artist-in-residence at Blue Macaw in Boscobel, Reinhard says his first trip to Jamaica has stirred his creative senses, and he couldn’t be happier.

Reinhard is here for a monthlong working visit at the invitation of Bianca Bartley and Zuar Jarrett, the programme director and chairman, respectively, of the recently launched creative initiative in St Mary targeting local and foreign artists spanning various disciplines.

“Jamaica has been great so far. This is my first time on the island, any island for that matter,” he said.

He added: “It’s always nice to be with people that are familiar with the area, and I’ve been made to feel very welcome. It’s great to be the inspiration for this project.”

Two weeks into his stay, Reinhard, an ardent ornithologist, whose works draw inspiration from late Dutch-American abstract expressionist Willem de Kooning, feels that his greatest artistic asset is his versatility. “It’s often considered a mistake in the art world to have multiple styles, but I have to go wherever my inspiration takes me. If you were referring only to my paintings featuring birds, I would say it’s my ability to render the birds accurately, but in a way that gives them personality.”

Reinhard’s works will be exhibited at his residency’s final exhibition on May 8, culminating in May 16’s big reveal.

American Animals, the 2018 biopic, written and directed by The Tinder Swindler’s Bart Layton, is an acclaimed cinematic account of a younger Reinhard, a then Transylvania University junior whose plot to steal one of the rarest of US art history titles – naturalist icon John James Audubon’s 1827 tome Birds of America as well as a first-edition Origin of the Species by Charles Darwin - led to guilty pleas from Reinhard and three chums, who paid the price: seven-year convictions across the board.

“What I found incredibly valuable about prison was the multiculturalism. My world view actually expanded. I was not in my ordinary largely white existence anymore. I was in interaction with people from nearly every country in the Americas,” he reflected on the time spent between prisons in Kentucky and Texas. “It gave me an excellent opportunity to learn Spanish. Artistically, it offered me the freedom to make the work I wanted to make without concern for my audience. Limited means forced my creativity into new areas. I developed techniques that no one that I know of has done. I had so few distractions to take me away from my work, and only by bettering myself could escape the belief that I was losing my best years. I know now that they were my best years, and if I hadn’t gone to prison, they would have been lost to temptations of the so-called free world.”

Shuttling between his family’s adopted home in California, Colombia, and Stateside, Reinhard said: “The transition for me has been great. We live in 10 months of the year in Colombia and spend two in the States. I love that my kids will grow up seeing both worlds and experiencing both cultures. At first, we wanted to move to the States as quickly as possible, but we began to see the benefits of living in South America. For one, it’s cheaper, and this allowed me to work less and spend more time with my young daughter. To be such a big part of her life has been a joy. I wouldn’t trade it for anything.”

Looking ahead, the artist divulged that he is due to have a show next year in Los Angeles and has much to produce. “My son was born in January, so it’s been a busy time and I plan to take full advantage of the freedom I will have in Jamaica,” Reinhard stated. “The plan is to continue using birds as my subjects but bringing back some of my earlier prison styles to take my work to the next level. I still feel like I have a long way to go to reach my full potential, and I think Jamaica will be an integral step in that direction.”