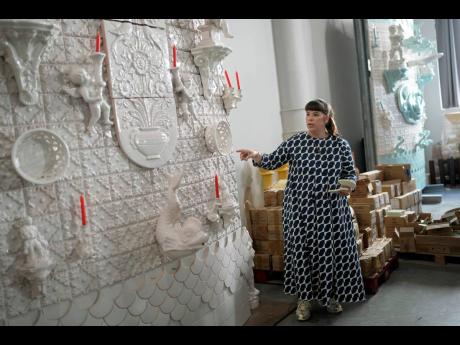 AP
Joana Vasconcelos points at a full size work model of a section of her 12 metres high and 15 metres wide ceramic wedding cake, at her studio in Lisbon. 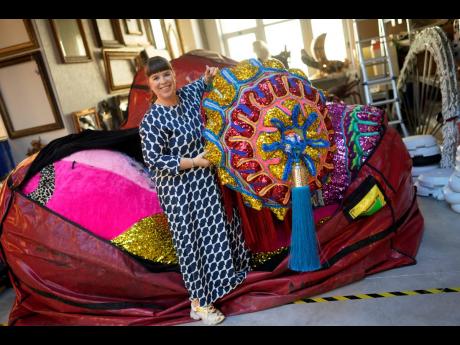 AP
Portuguese artist Joana Vasconcelos poses for a picture while pulling one of her works out of a huge bag at her studio in Lisbon. 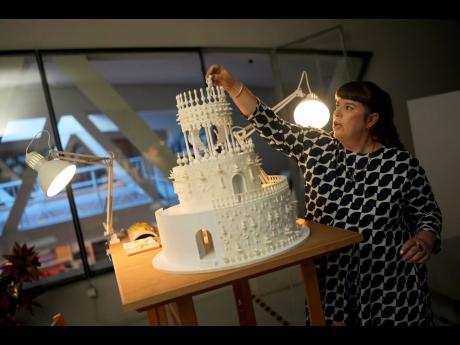 AP
Joana Vasconcelos places a human figure on the top tier of a model of her 12 metres high and 15 metres wide ceramic wedding cake.
1
2
3

As a former nightclub bouncer and black-belt karate instructor, Portuguese artist Joana Vasconcelos doesn’t shrink from the challenges thrown up by her latest lavish creation.

The 51-year-old, renowned for her big, in-your-face installations, is now creating a ceramic wedding cake that is 12 metres (40 feet) high and 15 metres (50 feet) wide for exhibition in England.

“The Wedding Cake” is mostly made of Portugal’s famous ceramic tiles called azulejos. Vasconcelos is using them in pastel pink, green, blue, and yellow in what is her most ambitious outdoor project yet.

And she savours the battle. “Every day you know that something will happen and something new will come up and you have to solve problems,” she said in a recent interview with AP. “It’s a very dynamic and alive thing.”

Her drive to make “The Wedding Cake” happen has already taken five years, being delayed by the COVID-19 pandemic, since she first mentioned it to British investment banker Jacob Rothschild. He wanted it for the gardens of Waddesdon Manor in southeast England, which hosts weddings.

Rothschild, Vasconcelos says at her studio in a former riverside boathouse in Lisbon, became her “partner for this crazy journey”.

Vasconcelos has built her reputation over the past two decades. Her trademark features are large, flamboyant pieces that juxtapose the high brow and low brow, draw on Portuguese handicraft traditions, allude to women’s perspectives and possess a stealthy sense of humour.

She made a splash on the international art scene at the 2005 Venice Biennale with “A Noiva” (The Bride), a five-metre-long (16-feet-long) chandelier crafted from 25,000 wrapped tampons.

Her “Marilyn,” in 2009, is a giant pair of stiletto shoes, well over head height, made from stainless steel saucepans and lids.

A mass-produced ceramic German Shepherd Dog is sheathed in an intricate length of crochet made by women in Portugal’s mid-Atlantic Azores Islands.

In 2012, Vasconcelos became the first woman and the youngest artist to exhibit at the Palace of Versailles, drawing 1.6 million visitors. Four years ago, she became the first Portuguese with a major retrospective at the Guggenheim Bilbao.

“The Wedding Cake” will have three tiers, with stairs for people to walk up to the top. Placed in a wooded area, it will also have water features and lighting.

After the installation’s various sections are trucked to England, the effort of putting it all together will begin. The unveiling is tentatively scheduled for the end of May.

Meanwhile, Vasconcelos is also working on getting her fourth dan in karate – another test of her mettle.

“If you’re not a fighter, you can’t do karate,” she says.