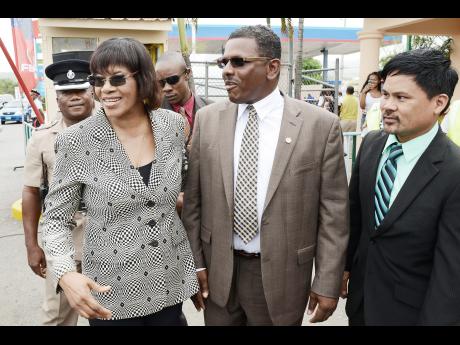 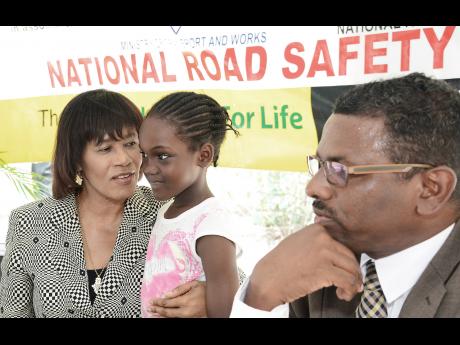 This year's activities are being held under the theme Road Safety For Life.

Simpson Miller emphasised that road safety is everybody's business and was especially passionate as she spoke about the safety of the nation's children. "No child should feel threatened going home from school," Simpson Miller said.

She reminded adults of their duty to preserve and protect our children, as they are Jamaica's future. The prime minister warned motorists who speed and ignore red lights that the authorities will be clamping down on them.

Simpson Miller also made an appeal to indisciplined drivers to change their driving habits and save the lives of their Jamaican brothers and sisters. She noted the intention to reduce road deaths to below 240 for the year, but unfortunately, the fatalities reached 307 in 2013 and 330 in 2014.

Up to June 3 this year, 150 road deaths had been recorded, nine more fatalities than over the same period in 2014.

The carnage has a ripple effect, as Simpson Miller said "road deaths help to destroy the social structure of society". This is because significant human resources are lost and, coupled with the expenditure in dealing with road crashes, it is a deterrent to economic growth.

Lynden 'Trevor' Heaven gave greetings on behalf of FESCO, one of the newest petroleum-marketing companies in Jamaica. Heaven chairs the organisation. It was not all talk, as students of Crescent and Angel's primary schools entertained those present.

Gregory Chung, third vice-president of the JGRA and the organisation's road safety committee chairman, said the "launch was very successful".

"This is the biggest launch I have seen in recent memory. The prime minister and three other ministers of Government were in attendance. We thank our partners - the National Road Safety Unit, the National Works Agency, the Jamaica Constabulary Force - for coming on board and we must say thanks to everyone who made this event possible especially our sponsors," Chung said.

Leonard Green, president of the JGRA, agreed that it was one of the JGRA's biggest Road Safety Month launches to date. He said that the JGRA refreshed the paint of a number of pedestrian crossings across the island on Labour Day and this will be done in more communities later in the year.

At the launch, the JGRA, in collaboration with the National Blood Transfusion Service (more widely known as the Blood Bank), staged a blood drive and a record 85 volunteers registered. This resulted in 70 units being pumped into the island's blood supply.

At 8 a.m. today there will be an official church service in recognition of Road Safety Month at the Church of St Margaret's, in Liguanea, St Andrew.