Biker deaths up, pedestrians down 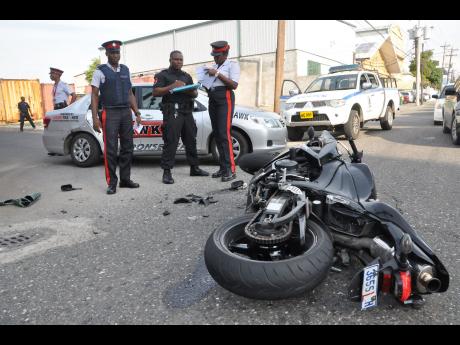 Jermaine Barnaby
Police and Hawkeye representatives gather information at an accident scene along East Street in Kingston on Monday, Janauary 19. 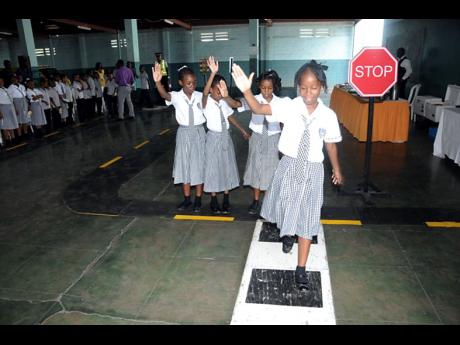 Contributed
Students of the Mavisville Preparatory School in Kingston demonstrate how to properly use a crosswalk during a demonstartion of the Police in Schools Programme at the Vineyard Town school late last month. 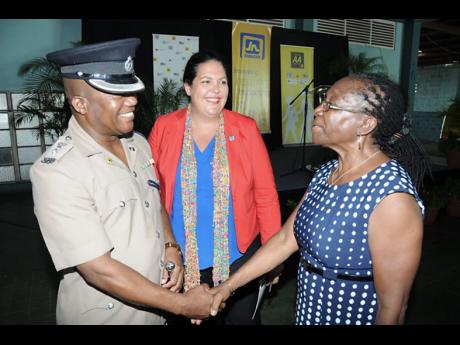 Motorcyclists have overtaken pedestrians as the most vulnerable road users in Jamaica, with motorcycle-related road fatalities almost doubling since the start of 2015, compared to last year. The Jamaica Constabulary Force's (JCF) Traffic Division is imploring motorcycle riders to exercise more discipline.

Senior Superintendent Calvin Allen, head of the Traffic Division, says that since January 83 motorcyclists have died on the country's roadways (at the time of speaking on September 29), almost doubling the 42 who perished over the corresponding period in 2014. On the other hand, pedestrian deaths in 2015 stood at 65, a reduction from the 81 deaths recorded during the corresponding period in 2014.

Allen lamented that, "The continued lack of discipline on roadways by motorcyclists and the non-wearing of protective helmets are major contributing factors to the sharp increase in the number of deaths among this group of road users."

The senior superintendent was speaking at the official launch of the Police in Schools Programme, held at the Mavisville Preparatory School, Vineyard Town, Kingston, on Tuesday, September 29.

The programme is being implemented by the Traffic Division in partnership with the Jamaica Automobile Association (JAA) and the Jamaica National Building Society (JN) Foundation.

At the current rate, the Road Safety Unit of the Ministry of Transport, Works and Housing is anticipating a 25 per cent increase in road fatalities for motorcyclists this year over 2014. SSP Allen noted that there are too many motorcyclists who lack the training necessary to operate their vehicles safely and are putting themselves and others at risk. He is anticipating that impending legislation will help reduce the fatalities.

"The new Road Traffic Act will seek to address that situation because, as it is now, a person can simply go to the Internal Revenue Department, take out a learner's licence and they are on their way driving," he explained.

However, he explained that under the new act, "persons will now go through the formal process of being properly trained to operate a motorcycle, and we hope that training will contribute to riders being more aware of the rules of the road and how to manoeuvre on our roadways".

Stephen Reid, marketing officer with the JAA, speaking on behalf of General Manager Duane Ellis, said that the association's support of the Police in Schools Programme is part of its commitment "to the United Nation's Decade of Action for Road Safety, which aims to reduce global road traffic deaths by 50 per cent by year 2020".

"We have also developed and are using an instructional video as part of the awareness building segment of the programme. In addition, our team also accompanies the Traffic Division's team to encourage students to put into practice the lessons they are taught," LuePann said.