US car sales up in September 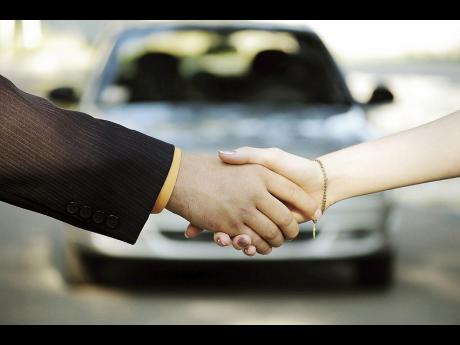 A handshake seals a car deal.

Retail sales rose just 0.1 per cent last month, after being unchanged in August, the Commerce Department said Wednesday. Over the past 12 months, sales have climbed 2.4 per cent.

Auto purchases shot up 1.8 per cent last month, while spending at restaurants advanced 0.7 per cent and shopping at clothiers improved 0.9 per cent.

More Americans are buying cars and dining out as the US economy has entered its seventh straight year of expansion. Spending increased amid a surge in hiring - 2.8 million jobs in the past year - that has since slowed in recent months. The slowdown, caused largely by global pressures, has raised questions about whether retail sales and consumer demand can sustain economic growth in the coming months.

The September retail sales report showed a mixed picture of lukewarm demand, with spending unchanged for the month when autos and gasoline sales are excluded.

"The latest report on US retail sales activity was downbeat," said Jennifer Lee, a senior economist at BMO Capital Markets. "Consumers continued to eat out but electronics failed to get a boost, even with the launch of the new iPhone 6s and 6s Plus."

However Ian Shepherdson, chief economist at Pantheon Macroeconomics, said that the prices for imported electronics and clothing have also become cheaper because of the stronger dollar, causing sales volume to look lower despite an appetite for these goods.

Auto dealers enjoyed a busy September. The industry said it sold 1.44 million cars and light trucks last month, up 15.8 per cent from a year ago. Buyers took advantage of low rates for auto loans and incentives over the Labour Day weekend to unload cars before the new model-year vehicles arrive at dealerships.

Yet overall retail sales have been muted for much of this year.

Spending at gasoline stations plunged 3.2 per cent in September because of lower energy prices. Sales at service stations have dived 19.7 per cent from a year ago, as drivers no longer need to spend as much on gas.

Prices at the pump have fallen nearly 28 per cent over the past year to US$2.31 a gallon, according to AAA.

Analysis by the JPMorgan Chase Institute suggests that consumers spent 80 cents of every dollar saved, with the largest shares going to restaurants and grocery stores.