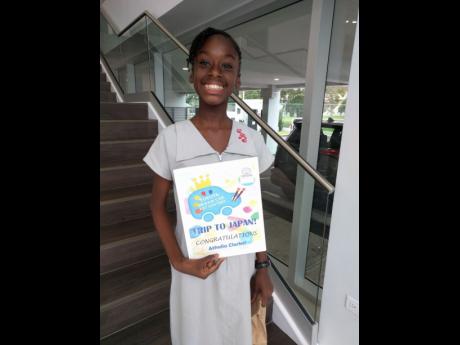 When you think of a dream car, what is the first thing that comes to mind? Toyota has taken this concept and allowed children to let their imagination run free in one of the world's largest global art contests. Children are allowed to imagine, invent, and inspire change for a better world.

This year, Toyota had its 11th hosting of the global contest, which received approximately 830,000 entries from over 79 countries, with 30 global winners. Toyota Jamaica submitted nine entries in the Global Toyota Dream Car Art Contest earlier this year and won big. The Toyota Jamaica winner is 10-year-old Althea Clarke from Queens Prep School.

The contest, which was themed 'Your Dream Car' , had three categories, which allowed ages children seven years old and under, eight-eleven years old, and twelve-fifteen years old to enter. Participants could use only standard drawing media, excluding digital devices, to create their artwork.

The best hand-drawn colourful art pieces were first chosen on a national scale and were then judged by an international panel.

The winners of the global contest will travel to Japan for the award ceremony, where they will find out if they received a gold, silver, or bronze star for their artwork.

"This is truly amazing considering this is the second year in which Toyota Jamaica has participated and we have a winner within the global contest," said Tracey-Ann Fletcher, assistant marketing manager of Toyota Jamaica. "Once in Japan, Althea will be doing a few tours, attending her awards ceremony, a workshop, sightseeing, and then a farewell party. At the awards ceremony, Althea will then know where she has placed within her category and awarded either gold, silver, bronze, best finalist, or special award," said Fletcher.

Althea created a leaf car as her entry in the Toyota Dream Car Contest. "I found it unique because everybody else was doing something popular. It was either something they saw in cartoons or they were just following what their friend had. I wanted to be different so I could have a chance at winning," said Althea.

The art piece took Althea almost a week to complete and submit. "I knew I was going to win because a lot of people liked my art piece when they saw it," she said.

When asked how she felt about being one of the global winners, she shared that she felt she made a difference. "I want to experience the different cultures, try to understand them better and enjoy what they have in store," said Althea when asked about her plans for Japan.

Her mother, Terrean Robinson-Clarke was excited about her daughter being selected as one of the contest's winners: "I knew she would have done well, but I am very surprised that the art piece got this far. I can't believe this," she said.